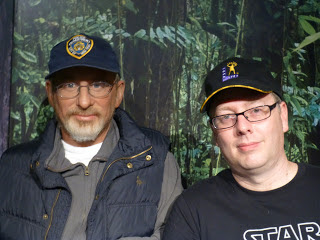 My first memory was going to see Star Wars with my late brother when I was only 5 years old. That experience changed my life. Since then I have and always will be a sci-fi geek. I have always been a fan of the big three in movies. George Lucas, Steven Spielberg and of course John Williams.

Everything Spielberg is the best way to describe how much of a fan I am of the director. Although a number of movies stand out for me. Jaws, Close Encounters of the Third Kind and Raiders of the Lost Ark are in my top five movies.

I also love gaming and that moment I fired up Monkey Island on my Amiga I will never forget. Since then I have played every title from Lucasarts and miss them very much.

This blog is my way to say thank you for giving me so much enjoyment over the years and its a great way to keep in touch with the latest news.

My wife is the best and even helps from time to time and never objects to the vintage Star Wars collection in the "geek" room. We are also TV extras in our spare time and appeared in a number of English and Welsh TV programmes.

I have done a number of reviews for books and other related items and last year attended Star Trek London as a member of the press. I was lucky enough to interview Michael J. Fox at this years London Film & Comic Con.

By welshslider
IDW Publishing proudly celebrates its 20th anniversary beginning in January 2019 with an all-new weekly event, IDW 20/20! Explore some of pop culture’s most iconic properties – Ghostbusters, Jem and the Holograms, My Little Pony, Star TrekTM, and Teenage Mutant Ninja Turtles – as secrets and startling revelations of these fan-favorite characters are revealed from 20 years into the future — or past! What made them into the heroes you love, and what twists does the future hold? "An anniversary like the one IDW is celebrating is a cause to look to the future and the past,” says IDW Editor-in-Chief John Barber. “It gives us a moment to reflect on where came from and where we’re going, because both directions are pretty exciting. We’re lucky to have partners like Hasbro, Nickelodeon, CBS Consumer Products, and Sony to share in the celebration — and to have these five sets of characters that have helped place IDW at the center of the pop culture universe!” January 2019’s IDW 20/
Post a Comment
Read more posts»

By Lisa Dullard
*Warner Bros. Home Entertainment provided me with a free copy of the Blu-ray I reviewed in this blog post. The opinions I share are my own* Synopsis: The Winchester brothers’ harrowing journey into the heart of darkness continues as Supernatural enters Season Fourteen. Sam (Jared Padalecki) and Dean (Jensen Ackles) have matched wits with monsters, demons, Heaven and Hell. But last season, the Winchesters and Castiel (Misha Collins) stumbled upon a terrifying alternate universe: an apocalyptic world where they were never born, all while training Jack (Alexander Calvert), the son of Lucifer, and trying to save their mother, Mary Winchester. The final battle with Lucifer and the Archangel Michael altered the Winchester’s lives forever… and created an even greater threat for Sam and Dean. The boys are back and willing to risk everything for their loved ones in all twenty thrilling new adventures, including a historic 300th episode, with a Winchester family reunion never
Post a Comment
Read more posts»

By welshslider
A Cap Wearing Brent Spiner as Data from Star Trek The Next Generation Checking Out His Script.  What the camera doesn't show is how fast Data is reading the script.
1 comment
Read more posts»