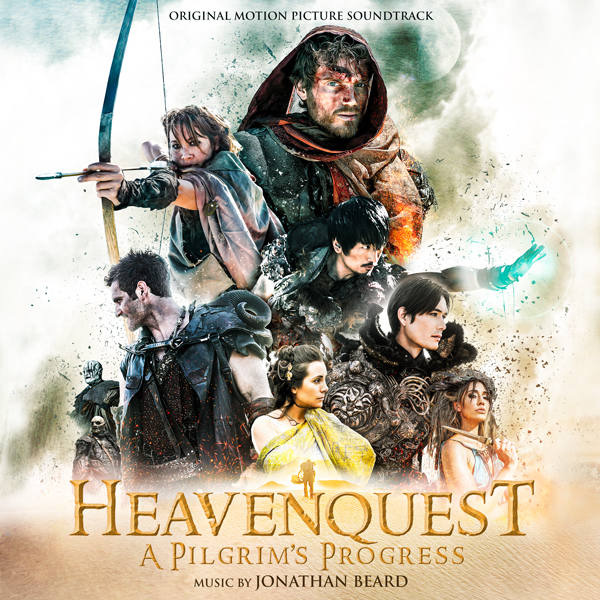 HEAVENQUEST: A PILGRIM'S PROGRESS
Music by JONATHAN BEARD
INTRADA INT-D 9001
Intrada announces its first digital-only release, continuing its support of soundtracks for smaller films in the ever-shrinking physical music distribution business. For its inaugural digital release, Intrada features Jonathan Beard's score to the Vudu-distributed film Heavenquest: A Pilgrim's Progress. Beard, who previously scored What Still Remains and Frank Vs. God, composed a score that served double-duty — embodying both the external, epic onscreen adventure and the inward journey of progtagonist Vangel (Patrick Thompson). As Beard notes, "There are numerous extended sequences with no dialogue where the lushness of the score really shines, in addition to some epic battle moments. But it is the quieter poignant material that resonates with me the most and was a particular treat to compose."

The score, a mix of electronics and acoustics, features a large percussion section and highlights vocal, violin, flute and cello solos throughout, plus otherworldy electronics to underscore the darker fantasy side of the film as well as flashback sequences. The epic main title features a soaring vocal by Elyse Willis. "Early on in the scoring process, I holed up in my studio with my synthesizer arsenal for a number of days, and designed numerous electronic textures that we used throughout those portions," said Beard.

In the film, Vangel is a regal man, forced into a journey upon his sudden and myserious arrest. Injured while escaping, he experiences strange visions and dreams featuring a lady in white calling to him from the unknown North. His adventure takes him through mountains, deserts, lakes and forests, with promises of a better life...if he can make it there alive.