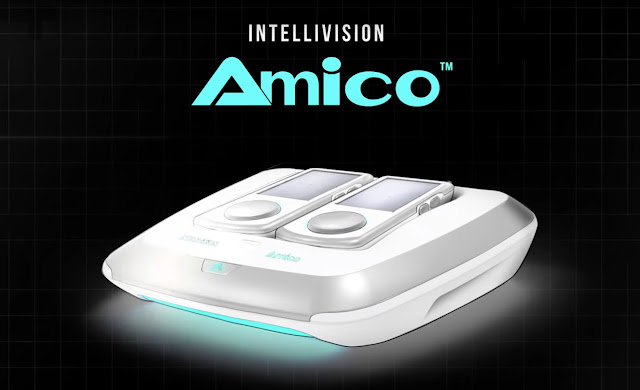 In anticipation of the Intellivision Amico family entertainment system launching later this year, Intellivision today released a new gameplay trailer available now. Showcasing 23 games, nearly half of which have never been seen, the trailer offers enthusiasts a sneak peek at the reimagined favorites and groundbreaking original games that will be featured on Intellivision’s newest system Amico, launching 10-10-2020.

Following a sold-out Founders Edition program – launched in January and selling out within hours – Intellivision is excited to announce a limited VIP Edition pre-order program for the highly anticipated Amico system. Beginning March 31, 2020, fans who take advantage of the pre-order will gain access to the Graphite Black and Glacier White consoles for the first time as well as a second chance to secure the Vintage Woodgrain model. Two wireless Bluetooth, color touchscreen controllers and five pack-in games come with each standard console. Also included in the VIP Edition program are a $25 RFID Amico digital game store gift card, a 25% off online merchandise store discount code, a lenticular Running Man trading card signed by Tommy Tallarico, and three digital soundtrack albums including “Earthworm Jim Anthology.” With a $100 refundable deposit, the pre-order bundle is $249 for Graphite Black or Glacier White and $279 for Vintage Woodgrain.

“Our supporters worldwide shared our excitement when we made our first 2,600 Founders Edition units available, and we received an overwhelming demand for another opportunity to participate after we sold out,” said Tommy Tallarico, Intellivision CEO and Amico creator.

Subscribed fans will receive an email invitation on Tuesday, March 31, 2020 at 10 a.m. Pacific Standard Time with purchase instructions. More information can be found at www.IntellivisionAmico.com, and the gameplay trailer can be viewed below: