DISCOVER THE ORIGIN OF MARVEL'S NEWEST SUPER HERO IN THE SWORD MASTER TRAILER! 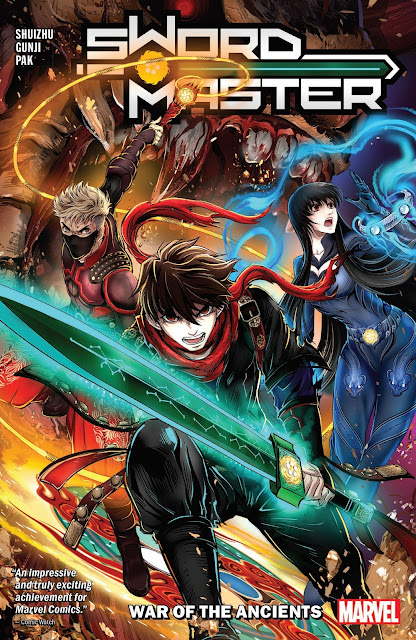 After tearing through fire goblins in last year’s War of the Realms, Sword Master went on to star in his own hit series that has taken the comic book world by storm! Now’s your chance to discover the mysterious origins of one of Marvel’s newest super heroes in the SWORD MASTER VOL. 1: WAR OF THE ANCIENTS TPB.

Brought you to by Chinese creators, writer Shuizhu and artist Gunji, Sword Master’s quest to find his missing archeologist father while exploring the secret behind his powerful mystical sword blends treasured aspects of Chinese culture with the beloved storytelling Marvel is known for. SWORD MASTER’s debut series has garnered millions of readers, becoming a mega hit with Marvel fans across the globe. See what all the buzz is about in the action-packed trailer featuring Editor Mark Paniccia and Editor in Chief C.B. Cebulski.

“Fans of classic Marvel super heroes will like SWORD MASTER because there’s lots of cool action, a charming cast of characters, and the classic theme of with great power comes great responsibility,” says Editor Mark Paniccia.

“We wanted to go to the best creators that China had to offer, Shuizhu and Gunji,” says Editor in Chief C.B. Cebulkski. “So they can bring authentic real stories of the country that they live in, of events they’ve experienced in their lives.”

Learn all about Marvel’s latest breakout character by picking up the SWORD MASTER VOL. 1: WAR OF THE ANCIENTS TPB, on sale now!