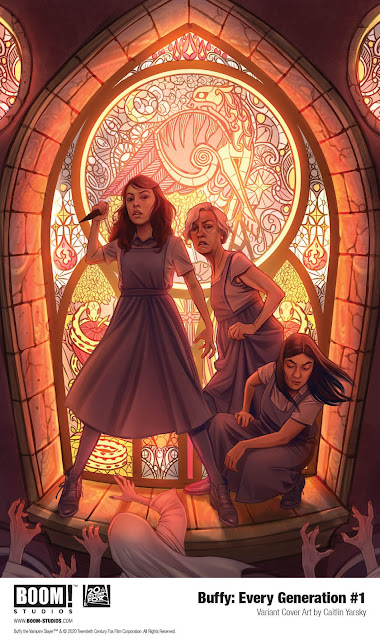 Buffy: Every Generation Changes Everything You Thought You Knew About the Slayer in April 2020

Discover the secret origins of some of the most important Slayers in history and the first appearance of a new character with a familiar face who will change the way you look at Buffy Summers and everything about her world forever! This is the Buffy comic that everyone will be talking about and the most important new character in over twenty years!

“Just when you think you know everything about the Chosen One, a brand new character shows up to turn the whole universe on its head ,” said Jeanine Schaefer, Executive Editor, BOOM! Studios. “Buffy’s been through the Hellmouth, fought alongside Angel, been replaced by Kendra, and now has to deal with the backlash in Ring of Fire but all of that is nothing compared to what comes next for the Slayer and everyone else in the Buffyverse. Hold onto your seats because this special will… BLOW. YOUR. MIND!”

Buffy the Vampire Slayer premiered on March 10th, 1997. The Emmy and Golden Globe-nominated series, which ran for seven seasons from 1997-2003. Chosen to battle vampires, demons and other forces of darkness, Buffy is aided by a Watcher who guides and teaches her as she surrounds herself with a circle of friends called the Scooby Gang.

Print copies of BUFFY THE VAMPIRE SLAYER: EVERY GENERATION #1 will be available for sale on April 8, 2020 exclusively at local comic book shops (use comicshoplocator.com to find the nearest one) or at the BOOM! Studios webstore. Digital copies can be purchased from content providers, including comiXology, iBooks, Google Play, and Madefire.