STAY ON TARGET WITH THE HAWKEYE: FREEFALL #1 TRAILER! 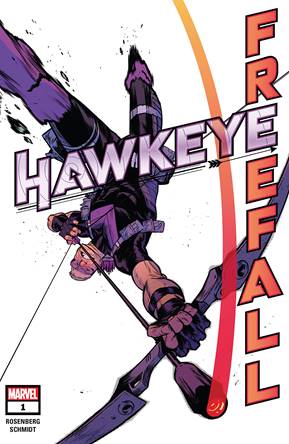 The world’s greatest marksman is back in another solo adventure! But so is the mysterious martial artist known as Ronin! Are the two one in the same? Look for clues in the HAWKEYE: Freefall #1 trailer featuring Associate Editor Alanna Smith, and writer Matthew Rosenberg!
The Hood has returned to the streets of New York, aiming to restart his criminal enterprise. At the same time, a new fighter enters the fray using Clint Barton’s one-time identity of Ronin – leading his allies to believe it’s actually him moonlighting as the brutal vigilante. Are Hawkeye and Ronin truly at cross-purposes, or do they share a common enemy in upstart super villain Parker Robbins?

“We were really looking for an artist who would capture the personality of Clint and just the characters in his orbit in a really engaging way, and [Schmidt] does that really, really well,” praises Smith

“It’s an action book and there’s a big mystery of who Ronin is. We’re giving you more Hawkeye content that you’ll hopefully love,” says Rosenberg.

Hawkeye: Freefall #1 by Matthew Rosenberg and Otto Schmidt is available tomorrow in comic shops, on the Marvel Comics App, and on Marvel.com! To find a comic shop near you, visit www.comicshoplocator.com or call 1-888-comicbook.