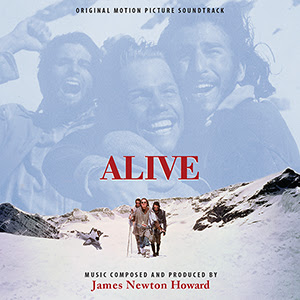 In 1993, Touchstone Pictures released the harrowing tale of Uruguayan rugby players and their families whose plane crashes in the Andes on their way to a match in Chile. It is a story of survival in some of the earth's harshest conditions, pushing humanity to endure the most devastating of circumstances. For Alive, composer James Newton Howard wrote a score that was to capture not only the desperate, seemingly hopeless conditions, but set the music against a background of natural beauty and tenacity of the human spirit.

At the time of the film's release, due to the constraints of the day, a 30-minute album of highlights was released, representing less than half of the score's full 73 minutes. Given the difficult subject matter, the film also under went changes in order to present the story in its most powerful light. As a result, several sequences were rescored, resulting in some 30 minutes of alternate versions of the score, some vastly different from their original counterparts. Additionally, two powerful cues recorded for the trailer were uncovered. All of this is presented here in this 2-CD presentation of this magnificent work from elements within the Disney vaults and from the composer himself.

Howard wrote a main theme reflecting triumphant survivalism that propelled the survivors to find a way off that mountain. First heard on solo guitar, it opens up at the end in a huge, glorious rendition when 16 of the original 45 passengers make their escape. Directed by Frank Marshall, the film stars Ethan Hawke as Nando Parrado, who emerges as the main character and leader of survivors.

Listen to the podcast about this album!