ENTER RAVENCROFT: INSTITUTE FOR THE CRIMINALLY INSANE ON JANUARY 29TH! 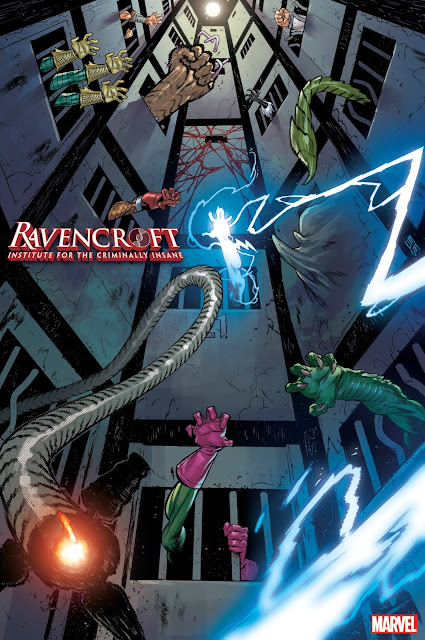 Destroyed during ABSOLUTE CARNAGE, Ravencroft: Institute for the Criminally Insane reopens its doors on January 29th in RAVENCROFT #1, and you’ll want to be there for all the dark secrets that are unearthed during this sinister tale… Writer Frank Tieri teams up with artist Angel Unzueta to bring the historic Marvel Universe asylum back to its terrifying glory!

Here's what Tieri had to say when the series was first announced at New York Comic Con 2019:

“What we'll learn in this event is that the original Ravencroft predates the one we know, that the very land itself that the site was built upon is soaked in blood. That there are connections to people, organizations, and events throughout Marvel history that were previously undisclosed. That in many cases, it can be said that Ravencroft is a site where evil was birthed in the Marvel U.

It all leads up to the five-issue RAVENCROFT limited series, which will see a new Ravencroft rise from the ashes...along with all the good—and yes, the bad—that'll come with it.

You have been warned, kids…”

RAVENCROFT #1 by Frank Tieri and Angel Unzueta goes on sale January 29th in comic shops, on the Marvel Comics App, and on Marvel.com! To find a comic shop near you, visit www.comicshoplocator.com or call 1-888-comicbook. For more information about the series, visit Marvel.com.