Sir Derek Jacobi returns as the War Master from Doctor Who 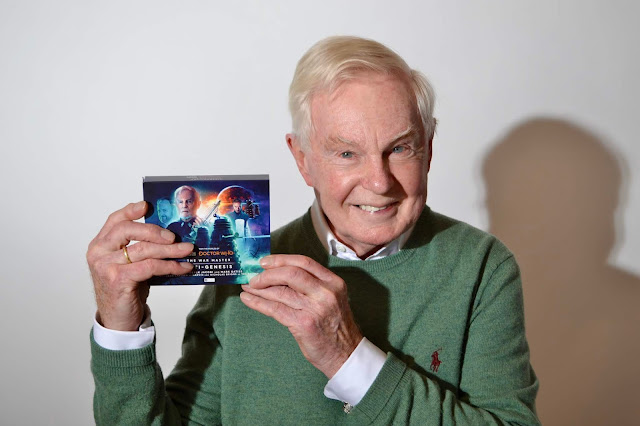 Starring Sir Derek Jacobi and Mark Gatiss, this four-part box set pits Master versus Master, in a story that journeys back in time to the birth of the Daleks, on the planet Skaro.

In a Time War, there is a crime that not even the Daleks would dare consider. But the Master has more than considered – and he is ready to commit.

When his TARDIS returns to Gallifrey carrying his corpse, a chain of events ensues that will change established history. Old friendships will be destroyed and dark alliances formed, as the Master exploits a terrifying truth.

Even for the two most powerful races, time can be rewritten.

Director Scott Handcock said: “It's been two years since we resurrected the Derek Jacobi incarnation of the Master, and since then he's taken control of a colony of Ood and faced off against the Eighth Doctor. Now, he's back, and interfering in the genesis of the Daleks themselves - with appearances from Gallifrey fan-favourite Narvin (played by Seán Carlsen), and even the Doctor Who Unbound alternative universe Master, played by the incomparable Mark Gatiss.

“It's a massive storyline - as you'd come to expect from Nicholas Briggs and Alan Barnes - bursting with ideas, brought to life by a phenomenal cast and crew. Is this the end for the War Master? Think again.”

Writer and actor, Nicholas Briggs explained: “I find it fascinating to delve into the Master’s motives during the Time War. He always wants to control and be sitting on the throne of whatever he sees. So I devised his ultimate strategy for ultimate victory. The ramifications of that make for a mind-bendingly entertaining yarn, as the Master finds himself in a win-win situation. In Doctor Who, the baddies always get defeated. So what’s it like for a baddy to win? What exactly happens next?

“It was great to be in the position of devising the box set, script editing it, writing half of it, with my much-loved friend and colleague Alan Barnes handling the other half, and then actually getting to be in the studio, playing the Daleks opposite Sir Derek Jacobi. What’s not to love about a job like that?”

From the Flames by Nicholas Briggs

After the Master’s TARDIS returns his remains to Gallifrey, in accordance with his final wishes, an intricate plot begins to change the nature of the universe forever.  But even in death the Master threatens life. And only CIA Coordinator Narvin can hope to stop him.

As the Master infiltrates the Kaled scientific elite, the Time Lords seek to counter his interference. But while Narvin and President Livia try to stabilise the past, a new and horrifying future dawns in the wastelands of ancient Skaro.

With all known history threatened, the Daleks take desperate action to preserve their established legacy. When they cross dimensions to recruit an alternative incarnation of the Master, an uneasy alliance is formed … But can either side truly trust the other?

He Who Wins by Nicholas Briggs

The Master has achieved an ultimate victory. But at what cost?

The first three series in The War Master range – Only the Good, The Master of Callous and Rage of the Time Lords – are available from Big Finish Productions at £34.99 each for the collector's edition CD box set or £29.99 for the digital download.

Save money and buy a bundle of all four series at just £90 for the collector's edition CD box set or £80 for the digital download.