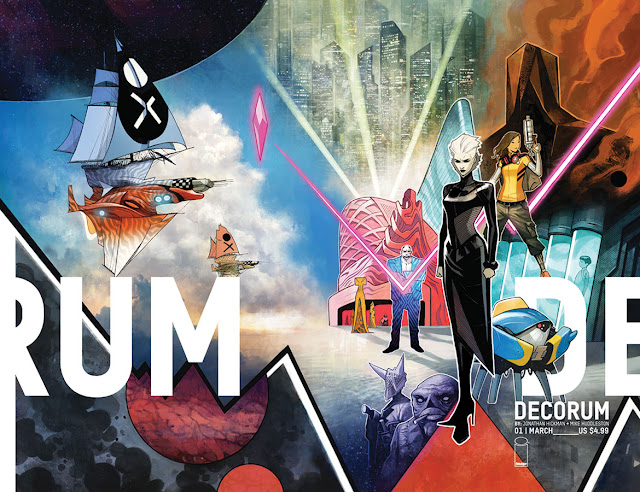 The bestselling, comics titan Jonathan Hickman (House of X, Powers of X, East of West) teams up with fan favorite artist Mike Huddleston (Middlewest, House of X) for an all-new, ongoing science fiction epic in Decorum. The series is set to launch this March from Image Comics.

Decorum will blend the high impact, event level storytelling of Hickman’s recent re-envisioning of X-Men with the sprawling, addictive worldbuilding of the recently concluded East of West.

"We’ve been quietly working on this book for over a year and I’m having the time of my life," said Hickman. "Mike is one of those ridiculously talented artists who is both technically proficient and insanely stylistic—everyone is just going to love what he’s done here."

There are many assassins in the known universe. Decorum is the story of the most well-mannered one.

Huddleston added: "I told Jonathan early on that just wanted to both draw cool stuff and tell a good story, and good news! We’re doing both in spades."

Decorum #1 will also be available for purchase across many digital platforms, including the official Image Comics iOS app, Amazon Kindle, Apple Books, comiXology, and Google Play.