Escape into the world of Jumanji: The Next Level in 4DX and ScreenX at Cineworld cinemas 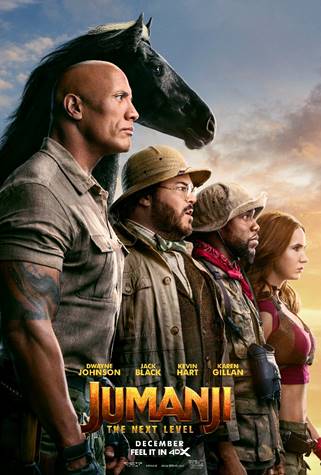 Cinemagoers will be dropped into the hilarious and unforgiving world of Jumanji: The Next Level when the action-packed blockbuster is released in 4DX and ScreenX on 11th December, exclusively at Cineworld. Previews for the film will also be shown in 4DX on 7th and 8th December to help crank up the action for early-bird fans.

Audiences will be taken through the harshest desert landscapes, highest mountaintops and the deadliest jungles, as they’re get sucked back into the video-game for an even tougher challenge with the Dwayne ‘The Rock’ Johnson, Kevin Hart, Jack Black and Karren Gillan returning for the ride along with many more.

Both 4DX and ScreenX will give audiences the sensation of being a character in the Jumanji game with the innovative technology on offer. When seen in ScreenX, audiences will experience key sequences of Jumanji: The Next Level expanded onto the left and right side walls of the ScreenX auditorium, showcasing snowy mountain peaks, vast deserts and deep jungle in their expansive glory and bringing the audience closer to the world than ever before. 4DX will again bring audiences the action right to their seats, with environmental effects such as thunderous wind and rain, and dense fog and snow enhancing the landscapes.

In Jumanji: The Next Level, the gang is back but the game has changed. As they return to Jumanji to rescue one of their own, they discover that nothing is as they expect. The players will have to brave parts unknown and unexplored, from the arid deserts to the snowy mountains, in order to escape the world’s most dangerous game.

The release follows on from the hugely successful release of Jumanji: Welcome To The Jungle in 4DX in 2017, which received plenty of adulation from cinemagoers for the exciting experience in 4DX, and tallied a global box-office total of $9 million.

Jumanji: Welcome To The Jungle is in UK and Ireland cinemas from 11th December 2019.