THE FUTURE IS IN PERIL IN THE AMAZING SPIDER-MAN ‘2099’ LAUNCH TRAILER! 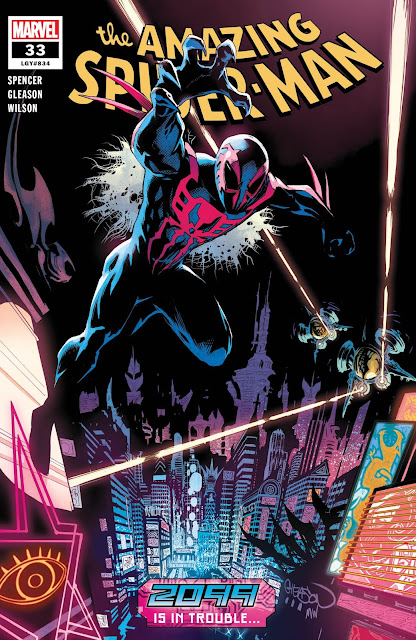 The past and future collide! Can the Spider-Men of two times set things straight, or will there be only dark times ahead for the Marvel Universe? The first chapter in the epic Amazing Spider-Man event, “2099,” hits stands tomorrow – get the lowdown on the story in this launch trailer featuring Executive Editor Nick Lowe and writer Nick Spencer!

Miguel O’Hara, the Spider-Man of the year 2099, travels back to our time to enlist Peter Parker’s aid in preventing the collapse of the time stream. But with Spider-Man’s past making his present tense and Doctor Doom seeking to make the future perfect, does Spidey stand a chance? Plus – see a slew of new and returning heroes and villains in a series of 2099 one-shots!

“This isn’t an alternate timeline! This isn’t a What If…! This is the future of the Marvel Universe!” exclaims Lowe.

Amazing Spider-Man #33 is on sale tomorrow in comic shops, on the Marvel Comics App, and on Marvel.com! To find a comic shop near you, visit www.comicshoplocator.com or call 1-888-comicbook.