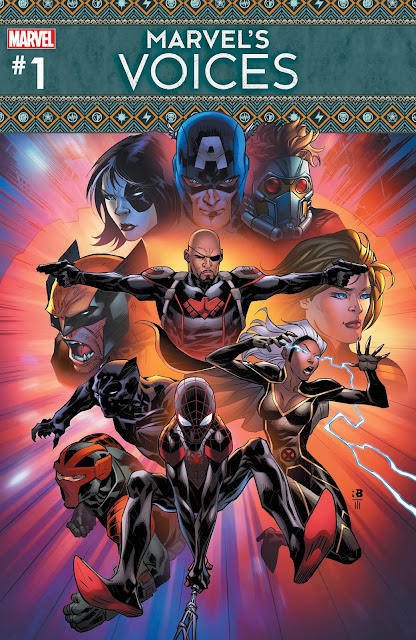 Marvel’s acclaimed podcast series makes its way to comics in a one-shot of brand-new adventures this February!

Following last year’s debut of Marvel’s bi-weekly podcast interview series, Marvel’s Voices, Marvel will continue to expand the spotlight on some of the comic book industry’s most critically-acclaimed storytellers with MARVEL’S VOICES #1, written and drawn by an all-star roster of talent including Vita Ayala, Roxane Gay, Brian Stelfreeze, Method Man, and many more!

In this gripping one-shot anthology, fans will get another look at the X-Men following the events of House of X and Powers of X; the return of Moon Girl and Devil Dinosaur; and other stories featuring the Hulk and Wolverine, Black Panther, Killmonger, She-Hulk, Black Widow, Ant-Man, and the rest of the Marvel Universe.

“I’m absolutely thrilled and honored to oversee this historic #1 issue celebrating the characters and creators that make up the grand mosaic that is the Marvel Universe, reflecting life as we live it! Not just the world outside our windows, but the fantastic worlds of heart and culture inside those other windows, too,” said the book’s editor Chris Robinson.

Since the podcast’s launch, Marvel’s Voices has featured guests and talent from across Marvel’s comics, live-action television shows, animation, games, and celebrity fans of Marvel from entertainment and beyond. The series garnered a loyal following for its in-depth exclusive interviews by host Angélique Roché, highlighting unforgettable stories and key moments from the Marvel Universe through a wide range of unique perspectives. Marvel’s Voices will launch its new season in February 2020.

Cover art by RYAN BENJAMIN
THE WORLD OUTSIDE YOUR WINDOW!

Marvel’s acclaimed podcast series focusing on telling the stories of diverse creators and their unique perspectives becomes a one shot of brand-new adventures! The X-Men find their place in the world after declaring a new nation! Killmonger strikes! Moon Girl and Devil Dino return!