ANT-MAN IS BACK AND BETTER THAN EVER 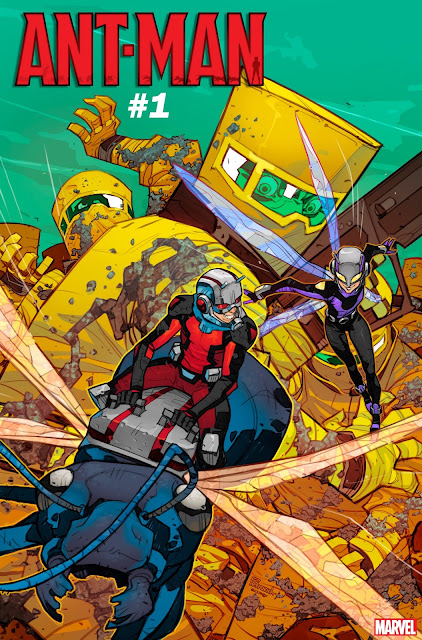 Announced at MCM Comic Con London, Ant-Man is set to make a major comeback this February with a new series that will have the entire Marvel Universe buzzing! Zeb Wells and Dylan Burnett join forces to tell a tale that will take Ant-Man from the anthill to the world stage.

Known for his lively humor and slick dialogue on books like NOVA and AMAZING SPIDER-MAN, Zeb Wells is the perfect fit for the wisecracking former thief and is ready to infuse Ant-Man with his trademark wit. “Dylan Burnett, Mike Spicer and I are out to put the ant in Ant-Man, turn over some rocks and craft a bug-forward tale that starts small and spins into a world-spanning adventure,” said Wells. “And you know Stinger (Cassie Lang) is coming along for the ride.”

The series will open with Scott Lang down on his luck and desperate for adventure until he’s looped in for a job only he can accomplish. What begins as a seemingly unheroic task for local beekeepers rapidly escalates into a conspiracy that could threaten the Earth! Throughout this journey, Ant-Man will not only have to prove himself as a hero, but as a parent to his daughter Cassie Lang as well. A Super Hero herself, Cassie will be joining her dad as Stinger as the father/daughter duo embark on this bug-filled quest together, along with many of your other favorite Marvel Super Heroes!

With books like X-FORCE and COSMIC GHOST RIDER under his belt, Dylan Burnett will easily match Wells’ energy, and his kinetic art style will make sure this fast-paced, globetrotting romp is one readers will never forget.

ANT-MAN lands in stores this February!

Ant-Man is back and doing better than ever! Er, at least according to him, but Stinger and the anthill he’s living in say otherwise. Desperate to raise his daughter’s opinion of him, Ant-Man takes a job from local beekeepers only to uncover a global conspiracy that could topple the world order! No time to call the Avengers, this sounds like a job for –ANT-MAN?! Join the explosive creative team of Zeb Wells (NOVA) and Dylan Burnett (X-FORCE, COSMIC GHOST RIDER) as they take Ant-Man to all-new heights in this epic adventure!