THOR #1 FROM CATES AND KLEIN LAUNCHES IN JANUARY 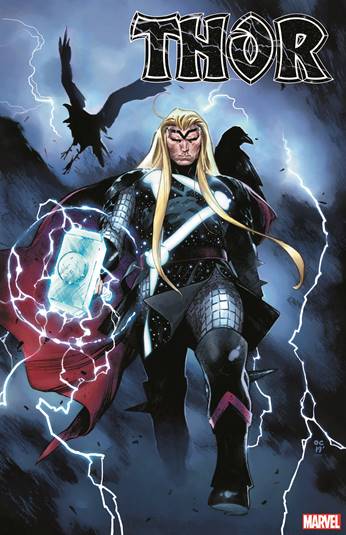 A mighty creative team will be taking over the reins of Thor next year! Announced at Marvel’s Next Big Thing panel at New York Comic Con, Donny Cates and Nic Klein will be ushering the God of Thunder into his next era starting in January. The quest Thor is on will be the stuff of legend, filled with thunderous adventure as well as mystery as the character finds himself in unexpected new territory and facing off against an ancient threat known as The Black Winter.

Nic Klein brings his artistic talents to Thor’s new journey, starting with a brand-new look worthy of the King of Asgard. Get your first look at Nic Klein’s design below and prepare yourself for the story behind Thor’s eye-catching new look is as surprising as it is epic! “I’m incredibly excited and honored to be working on this with Donny,” says Nic Klein. “THOR is one of my favorite comic book characters so I really tried to up my game to do Thor and all of Asgard justice.”

Donny Cates has already tackled some of Marvel’s most legendary characters to wild success and THOR will be no exception! “In all my wildest dreams, I could never have imagined a world in which I was worthy of writing THOR,” says Donny Cates. “From Stan Lee and Jack Kirby, all the way to the legendary run I am so foolishly following by the great Jason Aaron, it is beyond an honor to enter the golden halls of Asgard, and to pave the path (Far beyond the fields we know...) for the Thunder God himself. Know that you will have my best, true believers.  For all of you. For Asgard. Forever.”