STAR DEBUTING IN JANUARY FROM MARVEL 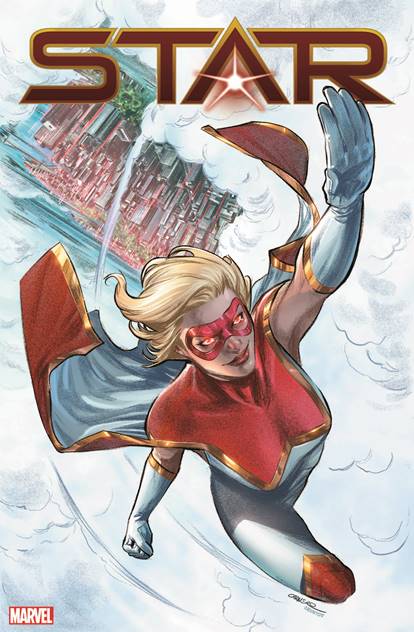 Star, an exciting addition to Marvel Comics’ legendary lineup of super heroes, will have her very own limited series this January. Announced at the NYCC Retailer Panel, the breakout character from the pages of CAPTAIN MARVEL will be starring in her own adventure, written by current CAPTAIN MARVEL scribe and Star’s creator, Kelly Thompson! Star had her first appearance this past July in CAPTAIN MARVEL #8 and the mystery surrounding her identity combined with a stunning character design from artist Carmen Carnero had readers clamoring to learn more about who she was!

“The excitement surrounding Star has been really fun to watch,” says Kelly Thompson. “And there's still a big surprise coming in CAPTAIN MARVEL #11 later this month...and it's the kind of surprise that sort of DEMANDS a mini-series like this to explore the mysteries surrounding her and her importance and potential in the larger Marvel Universe.”

“The whole CAPTAIN MARVEL team loved the character from the beginning, but the fan and retailer response to her has been overwhelming. We’re very grateful and excited to push her even higher in the spotlight,” says Editor Sarah Brunstad. “We had such a great time developing her and waiting for her big moment, and I’m ecstatic that Carmen is staying with the character to do the covers for this miniseries.”

THE BREAKOUT CHARACTER GETS HER OWN DEATH-DEFYING SERIES!
Ambitious reporter Ripley Ryan was one of the victims caught up in Nuclear Man’s apocalyptic schemes and later became the hero STAR, adored by everyone. But in truth she was Dr. Minerva's attempt at a Kree-human Super-Soldier. Desperate for the power and strength to control her own destiny, she tried to kill Captain Marvel — and failed. Ripley was left, defeated and powerless, in the Raft. But something strange has happened, and Star now finds herself more powerful than ever before. And no one in the Marvel Universe is prepared for what it means.