Doctor Who: The Edge of Time launches on November 12th 2019 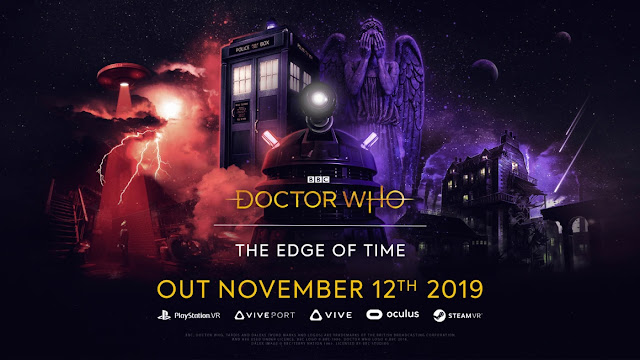 Publisher PlayStack and Developer Maze Theory are proud to announce that Doctor Who: The Edge of Time, the feature-length VR videogame, will launch on November 12th 2019.

With multiple references to the series and its 55-year history, Doctor Who: The Edge of Time combines action, adventure and sci-fi, equipping players with the Sonic Screwdriver to solve mind-bending puzzles, escape treacherous environments and come face-to-face with classic Doctor Who monsters, all within virtual reality. Escape from Weeping Angels, face off against brand-new creatures and pilot a Dalek shell to harness its fearsome weaponry in a thrilling and immersive single-player adventure!

To receive the latest updates, wishlist Doctor Who: The Edge of Time on Steam.

Features:
Become part of Doctor Who - a thrilling single-player adventure developed by Sony London alumni (VR Worlds, The London Heist, Blood and Truth), Doctor Who: The Edge Of Time will immerse players in Doctor Who like never before as they travel across space and time to save reality.

Stunning cinematic visuals - from the Dalekanium of a Dalek’s shell, to the stone-cold terror of a Weeping Angel, experience stunning visuals that bring the show to life!

Oculus Quest support - experience the next level of immersion with Oculus Quest, as you explore the Doctor Who universe without boundaries in untethered virtual reality