CLOCKWISE - Newly restored and on Blu-Ray for the first time 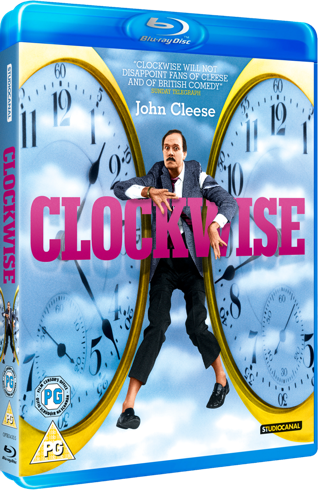 I absolutely love the 1980's British comedy classic, Clockwise starring John Cleese.  Well the good news is thanks to STUDIOCANAL we are getting a fully restored editionon Blu-Ray for the first time.  Here's the full press release:

STUDIOCANAL is thrilled to announce the release of a newly restored version of the madcap British comedy classic, CLOCKWISE. Featuring a tour-de-force performance from John Cleese (‘Monty Python’s Flying Circus’, ‘Fawlty Towers’) in full Basil Fawlty mode, audiences will have the opportunity to experience this lesson in the art of comic timing looking better than ever when it is released on November 16 on DVD, Digital Download and, for the very first time, on Blu-Ray. For the 2019 restoration of CLOCKWISE, STUDIOCANAL returned to the original colour negative. The scanning, restoration and grading of the negative was performed in 4K.

With a razor-sharp screenplay by acclaimed author and playwright Michael Frayn (Noises Off, Copenhagen) and great supporting turns from Alison Steadman (Life is Sweet, Pride and Prejudice), Penelope Wilton (Downton Abbey, The Best Exotic Marigold Hotel) and Joan Hickson (‘Miss Marple’), CLOCKWISE is the film that inspired Cleese to make A Fish Called Wanda and remains a much treasured British comedy classic to this day.

John Cleese plays a clock watching headmaster obsessed with timekeeping. When he boards the wrong train on his way to headmasters' conference, however, his obsessive punctuality is put to the test. Truning back to find alternative means of transport, he hijacks one of his pupils who is taking the afternoon off school in her father's car. As the journey descends into further chaos, the head quickly begins to lose his schoolmasterly poise….