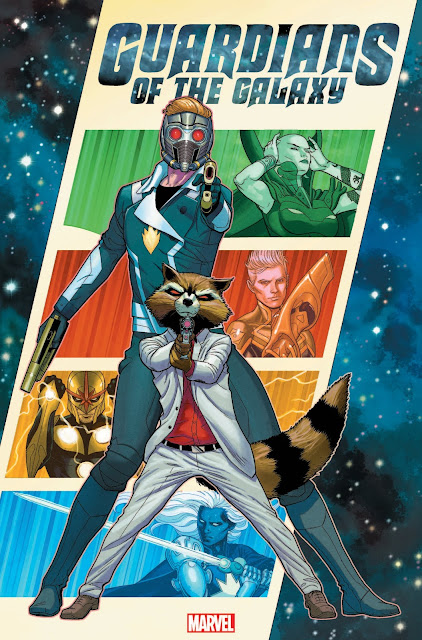 Al Ewing is currently taking the Hulk on strange new journeys in the critically-acclaimed IMMORTAL HULK and starting in January, he’ll do the same for everyone’s favorite ragtag group of space adventurers. Just announced at the Marvel’s Next Big Thing Panel at New York Comic-Con, GUARDIANS OF THE GALAXY will be launching in January under the new creative team of AL EWING and JUANN CABAL. Ewing’s spin on Marvel’s flagship cosmic title is sure to be intense, putting the Guardians in the center of a new intergalactic war and going up against the latest threats facing the galaxy, including the reborn Dark Gods of Olympus.

“GUARDIANS OF THE GALAXY is a high-octane spy-fi action-adventure set against an evolving backdrop of interstellar politics, intrigue and suspense,” says Al Ewing. “War is coming - and if the Guardians can't stop it, they're going to be right in the middle…”

The Guardians of the Galaxy are a family as much as they are adventurers and Juann Cabal is the perfect artist to balance those two tones. Known for his dynamic work on books like X-23 and FRIENDLY NEIGHBORHOOD SPIDER-MAN, the Guardian’s latest mission will look as beautiful as it does dangerous.

More details on the upcoming title will be released at a later date but you can bet that everyone’s favorite spacefaring heroes are about to experience the brand of chaos that only Ewing can deliver!

Once, they were a team of misfits. Now they're a family, and they've earned their peace. But the universe is not a peaceful place -- and it's only getting worse. The Great Empires are in turmoil. The rule of law is dead. And amidst the chaos, the Gods of Olympus have returned -- harbingers of a new age of war, reborn to burn their mark on the stars themselves. Someone has to guard the galaxy - but who will accept the mission? And will they survive it? Al Ewing (IMMORTAL HULK) and Juann Cabal (FRIENDLY NEIGHBORHOOD SPIDER-MAN) bring you in on the ground floor of a whole Marvel Universe of action and suspense!