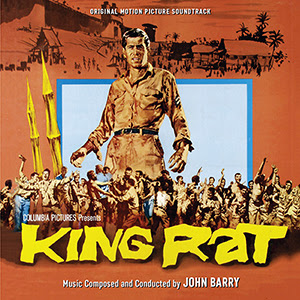 
This is not a story of escape. It is a story of survival.
Intrada's latest release is John Barry's 1965 score to the Columbia Pictures'film King Rat. A project that started out as a straight reissue of the Sony Legacy release from years ago took a remarkable turn when Intrada made a startling discovery during review of the master elements. What initially appeared to be a master of the mono LP program revealed itself to be the complete film sessions. The original Mainstream LP was a re-recording Barry conducted specifically for LP, including many different and new cues just for home listening. The more stark, somber film score had yet to see any form of release. This new album presents both a remastered edition of that original stereo LP program as well as the world premiere of the original film recording. The package includes notes by Barry expert Jon Burlingame.

John Barry's career took off to soaring heights in the '60s, bringing not only a plethora of important film scoring assignments, but also bringing a new sound previously unheard of and making him a sought after composer. It was during this period he had become part of the James Bond franchise, but also scored many other films including The Quiller Memorandum, The Knack and How to Get It, The Ipcress File, and of course, King Rat. 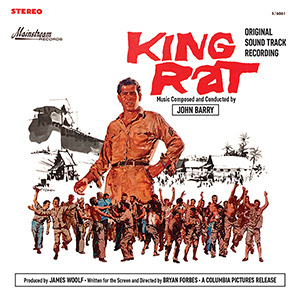 The film concerns American corporal King (George Segal) whose wheeling-and-dealing savvy has made him the a black marketeer par excellence in a prisoner-of-war camp in Singapore, incurring the jealousy and wrath of a handful of the ranking officers above him—notably the camp’s provost marshal, Lt. Grey (Tom Courtenay), a by-the-book martinet who is determined to take King down. King spots British officer Marlowe (James Fox) speaking in Malaysian and, well aware of how useful this skill could be, recruits him for some of his illicit but profitable activities. An American sergeant (Patrick O’Neal) and a British colonel (Denholm Elliott) are also on King’s payroll, and the top-ranking English officer (John Mills) effectively looks the other way. Other principal characters include a cynical doctor (James Donald) and an American enlisted man (Todd Armstrong). The final minutes of the film feature an early film appearance by Richard Dawson (Hogan’s Heroes) as a British paratrooper who arrives to inform the prisoners that the war is over.

Listen to the podcast with Doug Fake about this release!