Book of the Week: Sci-Fi Thriller, ECHOES OF WAR 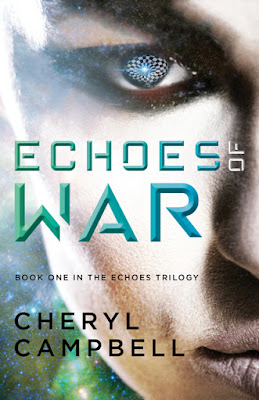 Decades of war started by The Wardens -- a genocidal faction of nearly immortal aliens called Echoes -- threatens the existence of any human or alien resisting their rule on earth. Dani survives by scavenging enough supplies to live another day while avoiding the local military and human-hunting Wardens. But then she learns that she is an Echo -- not the human she’s always thought herself to be -- and suddenly nothing in her life seems certain.

Following her discovery of her alien roots, Dani risks her well-being to save a young boy from a violent kidnapping -- a move that only serves to make her already tenuous existence on the fringes of society in Maine even more unstable, and that forces her to revisit events and people from past lives she can’t remember. Dani believes the only way to defeat the Wardens and end their dominance is to unite the Commonwealth’s military and civilians, and she becomes resolved to play her part in this battle. Her attempts to change the bleak future facing the humans and Echoes living on earth if the Wardens are allowed to maintain their grip on the planet will lead her to clash with a tyrant determined to kill her and all humankind -- a confrontation that even her near-immortal heritage may not be able to help her survive.

ABOUT CHERYL CAMPBELL:
Cheryl Campbell is the award-winning author of the ‘Burnt Mountain’ fantasy series, consisting of five novels published between 2013 to 2016. She was born in Louisiana and lived there and in Mississippi prior to moving to Maine. Her varied background includes art, herpetology, emergency department and critical care nursing, and computer systems. In Spring 2018, she returned to her interest in a wandering lifestyle (which she first did during her graduate studies of garter snakes on Maine islands). When not nomadic, she lives in Maine, and has won five awards from the New England Book Festival for her fantasy series. Cheryl is currently working on a science fiction trilogy. The first book of the trilogy, Echoes of War, will release on September 10, 2019 with SparkPress.