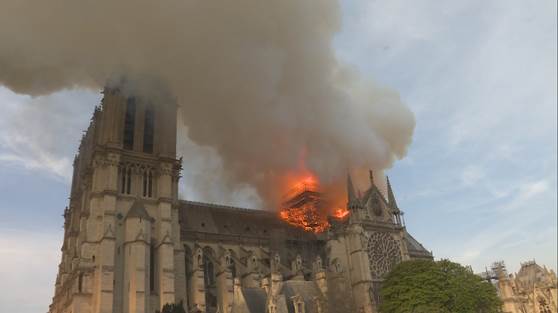 NATIONAL GEOGRAPHIC CHRONICLES THE HEROIC EFFORTS TO SAVE ONE OF EUROPE’S MOST-VISITED MONUMENTS IN NEW SPECIAL, NOTRE-DAME: RACE AGAINST THE INFERNO, FEATURING RARE FOOTAGE AND INTERVIEWS WITH FRONT-LINE FIREFIGHTERS

Earlier this year, the eyes of the world turned to Paris where sky-high flames engulfed one of the world’s most visited monuments, Notre-Dame de Paris. While hundreds of hours of recordings document this day, National Geographic pieces together rare footage along with key interviews and 3D reconstructions, to detail a precise timeline of events in its new special, Notre-Dame: Race Against the Inferno. The one-hour inside-access documentary tracks the devastating fire and heroic actions of the Paris Fire Brigade as it faces a series of seemingly insurmountable challenges and makes complex, life-or-death decisions to save this instantly recognisable World Heritage landmark.

Premiering Sunday 15th September at 9pm, Notre-Dame: Race Against the Inferno follows the actions and quick decision making of the early responders on the scene when mass is first interrupted by a smoke detector alarm. From those crucial first moments, through the seven-hour fight to keep the edifice standing against the darkening sky, and on to the following morning when investigators venture into the cathedral to assess the damage and try to figure out how the unthinkable happened, the cameras are in the thick of the action during this unprecedented catastrophe.

The maximum human and technical resources Paris has to offer are brought in to combat the escalating situation, including over 400 firefighters from 60 local fire stations; 13 extinguishing arms that can eject nearly 4,000 litres of water per minute; two boats and a hydraulic network, hundreds of metres long, to pump water from the Seine; and one high-tech Colossus robot capable of climbing stairs and withstanding extreme temperatures to fight fires. Thousands of onlookers line the banks of the Seine and surrounding streets, watching in eerie silence.

From the top chiefs at the centre of the planning to the firefighters on the front lines of the inferno, the special recounts how these brave men and women overcame impossible odds throughout the nightmarish ordeal. Among these, General Jean-Claude Gallet, head of the Paris Fire Brigade marshals his troops in the square in front of the cathedral. His right-hand man and commander of rescue operations, General Jean-Marie Gontier deploys the firefighters in a precise combat plan. Master Corporal Myriam, one of the first to enter the inferno, climbs up to a perilous exterior ledge to pump water onto the near 1,000-degree-Celsius heart of the fire. Chief Warrant Officer Jérôme is the first to arrive on the scene, and Euronews' Anelise Borges is one of the first journalists to go live on-air with the unfolding horror.

Already facing a scenario equivalent to 500 simultaneous apartment fires, the Paris Fire Brigade faces ever worsening conditions. Wind sweeps the flames across the roof frame, devouring the oak beams installed in the Middle Ages. Molten lead spits down from the roof into the inner recesses, threatening precious artworks, stained glass windows and objects of worship, including the Crown of Thorns allegedly worn by Christ at his crucifixion. The plumes of smoke turn yellow, a sign that the combustion is extremely toxic. When the spire — originally installed to replace the 13th century one damaged during the late 1700s — collapses and punctures the vault in several places, evacuation orders are given. But one final stand must be made inside the belfry before the night is over, to ensure the eight massive bells do not crash through the tower and bring the entire structure down with them.

Built over the course of a century after its first stone was laid in 1163, Notre-Dame de Paris has survived religious wars, the French Revolution and the Nazi occupation during World War II. How did a tragedy of this magnitude catch everyone by surprise? While investigators continue to probe the origins of the blaze — Was it a carelessly discarded cigarette butt or an electrical short-circuit? — Notre-Dame remains standing for future generations thanks to the rapid response and tireless efforts of the Paris Fire Brigade, which rallied every resource at their disposal to contain the fire and preserve one of the most prestigious monuments in French history without any loss of life.