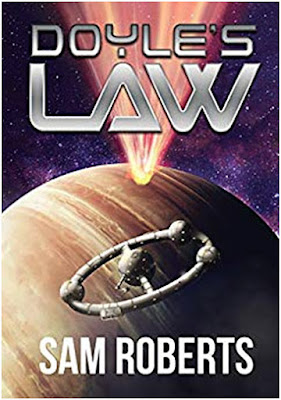 Sam Roberts’ ‘Doyle’s Law’ is an intricate, cinematic new thriller that fuses intense paranoia and science fiction, told through the periscope of a bumbling, inept scientist attempting to fix the space station he has royally sabotaged. It’s a story in two parts, as time twists, plots tangle and the depths of human clumsiness become chillingly evident. One critic recently wrote, “This damn book cost me too much needed sleep. It was like a giant puzzle with all the pieces slowly making sense and fitting together. Well done, sir.”

When most authors depict the crews of spaceships, they are painted as fearless, totally-in-control heroes using their wit and tenacity to achieve the unthinkable…

…But Chief O’Connor, protagonist in Sam Roberts’ ‘Doyle’s Law’ is slightly less noble. In fact, his entire crew suspects him of sabotage and rampant buck-passing. As hostilities rise and time becomes crucial, readers are literally thrown the book and left to work everything out for themselves.

Synopsis:
In the not too distant future, on a decaying space-station from a high Venus orbit, a cantankerous and disgraced scientist awaits the delivery of a mysterious shipment. He hopes to use it to invent a new propulsion system and, in doing so, salvage his reputation. However the station’s decommissioning crew, led by Chief O’Connor, are sceptical about his plans. They believe them to be nothing but drunken delusions, a theory which seems more than plausible given the bold and outlandish claims he has been making of late.

A routine docking going seriously awry, and a number of other strange goings-on around the station have thrown the crew into chaos. Accusations of theft and sabotage are thrown around, and for a while it seems as though everyone is doomed. However the source of the mystery is far beyond any of the crew’s comprehension, and the key to their salvation lies in the hands of a very unlikely hero.

“There’s no denying that mysteries and science fiction are staples of literature,” explains the author. “But I wanted to craft something that retains the hallmarks readers have come to crave, while throwing them a wholly-unconventional story full of plot twists that will leave their jaws on the floor.”

Continuing, “The entire crew of the station are perfectly flawed and not particularly up to the mission they are sworn to. Readers can now step in and see what went wrong and where, and how things can be straightened out!”

Reviews have been glowing. N. Kamper comments, “Bought this book on recommendation from a friend. I cannot explain why I liked this one without spoiling it for you. So get it, dive in, and read it until the end. It was a ride, and it was a wonderful story. Very hard to put down at points, with no unnecessary filler. Everything has a point. Everything has a reason. Don't look past anything; you'll miss out.”

Sarah Creeley adds, “This book is intriguing right from the beginning. It's unique because the author has his own ideas about time travel. There weren't any paradoxes or alternate time lines like you see in most books in this genre, and it was refreshing. I recommend it for anyone that enjoys science fiction, more particularly time travel, who is looking for something a bit different. I can't wait to see what else the author has in that imagination!”

About the Author:
Originally from New Zealand but now a Yorkshireman: Enjoying flat caps, proper ale and roasts on Sunday. Living and working in Leeds UK - and still trying to decide what to do when he grows up.