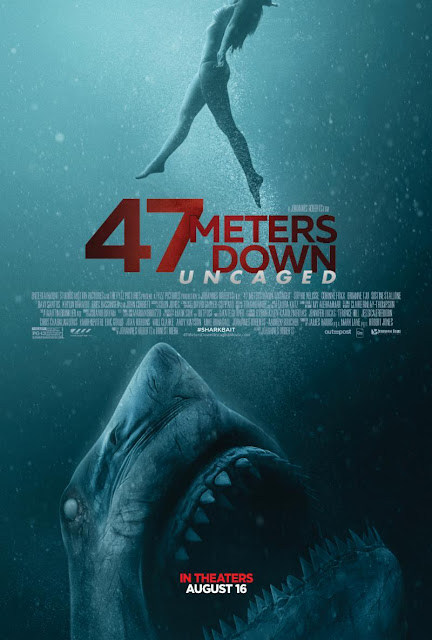 Entertainment Studios Motion Pictures (that's a mouthful even for a Great White) have released a new trailer and poster for the upcoming sequel, 47 Meters Down: Uncaged.  The first movie 47 Meters Down was made for a minuscule $5 Million and went on to make a whopping $62 Million worldwide.  Not a bad record for this vicinity.

The poster has taken a bit of inspiration from the 1975 Steven Spielberg classic, Jaws.  What about the trailer?  Well, you can watch it below and make your own decision.  The new shark movie is out on August 16th and comes in at a rather short 89 minutes.  So you can go out to the cinema, watch 47 Meters Down: Uncaged and be back in time to put Jaws 4 on to decide which one is worse.  I'm only kidding, nothing can beat Michael Caine's epic movie.

Here's the blurb:
47 Meters Down: Uncaged follows the diving adventure of four teenage girls (Corinne Foxx, Sistine Stallone, Sophie Nélisse, and Brianne Tju) exploring a submerged Mayan City. Once inside, their rush of excitement turns into a jolt of terror as they discover the sunken ruins are a hunting ground for deadly Great White Sharks. With their air supply steadily dwindling, the friends must navigate the underwater labyrinth of claustrophobic caves and eerie tunnels in search of a way out of their watery hell.

Thanks to IronWolf1970 on Twitter for fixing the poster: 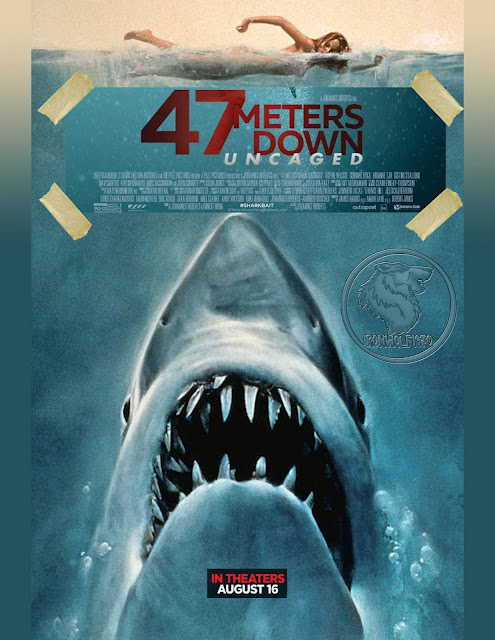