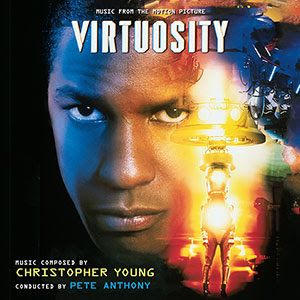 Intrada announces the premiere release of Christopher Young's electrifying score to the 1995 Paramount Pictures Denzel Washington action-thriller, Virtuosity. The score moves between two worlds – hard-hitting techno electronica that pumps up the brutal virtual computer world of the movie's universe and pulse-pounding orchestral action music for the film's final reels as reality and virtual reality collide. The dazzling array emanating from a cyberpunk ocean of synthetic textures, techo beats and electric riffs is unique to both composer and film, adding musical atmosphere to the relentless and simply evil AI SID. The line between electronic and orchestral worlds does not coincide with SID's emergence from virtual world to physical reality, but seques during the film's final third, when SID takes a child hostage and launches Death TV, unleashing ferocious orchestral fireworks as protagonist Parker Barnes hunts down and overcomes SID. 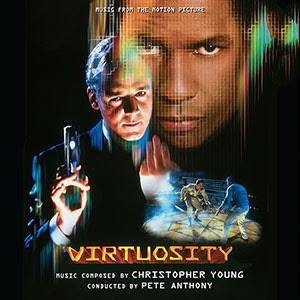 Young composed more than 50 minutes of electronic music for the first half of the film and a further 23 minutes of orchestral music, recorded at Paramount Scoring State M in the summer of 1995. With heavy editing in the film, some tracks on this new album are being heard for the first time, and Intrada presents it all in this 76-minute program that is a thrilling ride from start to finish.

It's 1999 in Virtuosity, where the Law Enforcement Technology Advancement Center has been tasked with developing bold new solutions to fight a growing crime epidemic. A virtual arena, reminiscent of modern video games, allows cops to match wits with AI SID 6.7. Alarmingly, SID’s personality is an amalgamation of psychological profiles from history’s most evil killers. To test the rig, LAPD Chief William Cochran (William Forsythe) recruits prisoners including his old friend Parker Barnes (Denzel Washington), a disgraced former cop with a tragic past. SID is slated to be decommissioned after one of the volunteers dies a horrible death. With the help of his amoral creator, SID is “born” into a synthetic android body, able to repair itself by assimilating glass. Unleashed upon an unprepared Los Angeles, SID sets out to wreak bloody havoc, putting Barnes on his trail and launching a game of cat and mouse.