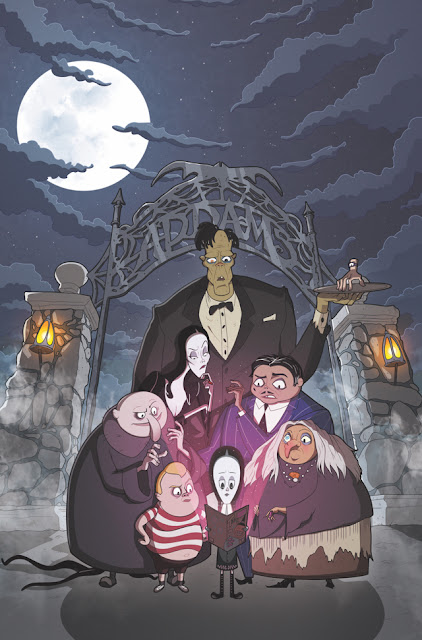 IDW Publishing has announced its first foray into the iconic kooky world of The Addams Family! The whimsical one-shot – entitled The Addams Family: The Bodies Issue – features a story by writer Zoë Quinn (Goddess Mode) and artist Philip Murphy (Star Trek vs. Transformers) and is timed to the October 11th release of the highly anticipated CGI animated film.

In The Bodies Issue comic, available in October, Wednesday Addams discovers a mysterious tome – one that promises true empowerment to the young woman who wields it. Wednesday decides to complete the dark rituals hidden within this Eleventeen magazine… and achieve ultimate power!

“As a goth who fell in love with The Addams Family at a young age, it’s a dream come true to write for the iconic, loving family of oddballs,” says Quinn. “As a comics creator, I’ve really enjoyed being able to play with visual gags and write the most fun dialogue I’ve ever created, too.”

“The Addams Family is definitely one of those iconic pop culture families that so many people grew up with and love. From Charles Addams’ original New Yorker cartoons to the TV series, movies, and animated series, everybody has their favorites,” says Murphy. “It’s definitely a dream project and I am sure that fans old and new will have a howling good time reading it!”

“As a little girl, I identified with the mischievous and misanthropic Wednesday Addams – and I know I'm not the only one! As the Addams are introduced to a new generation with a brand-new animated film, I'm so excited to bring Wednesday to the forefront of Addams Family storytelling with this new one-shot. Zoë and Philip will have you in stitches – maybe literally!” says editor Elizabeth Brei.

The Addams Family: The Bodies Issue one-shot will be available with two variant covers, by series artist Philip Murphy and Kate Sherron, respectively.

To secure copies of The Bodies Issue and future The Addams Family comic books and graphic novels, please contact your local comic shop or visit www.comicshoplocator.com to find a store near you.