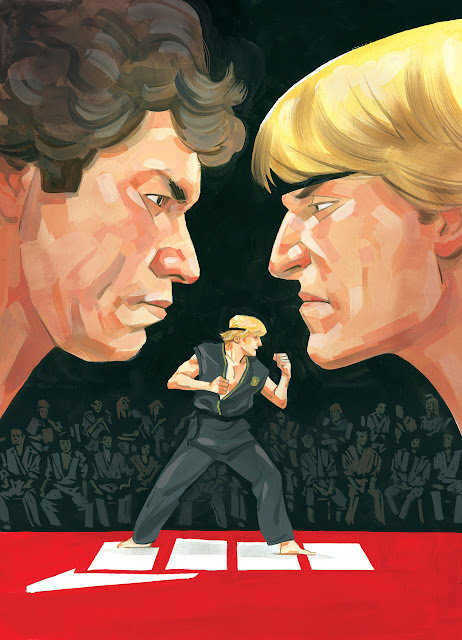 IDW Publishing brings the lifelong rivalry between Daniel LaRusso and Johnny Lawrence out of the dojo and into comic book stores with an all-new Cobra Kai: The Karate Kid Saga Continues miniseries, slated for release in Fall 2019. In collaboration with Overbrook Entertainment and Sony Pictures Television, IDW will develop new stories set within the continuity of the YouTube Premium original series, based on iconic characters from the cultural touchstone Karate Kid film series.

The Cobra Kai: The Karate Kid Saga Continues comic book series will be written by Denton J. Tipton (The X-Files) and illustrated by Kagan McLeod (Infinite Kung Fu). The first issue, slated to debut in October, will feature cover artwork by McLeod, as well as photos of the beloved cast and other iconic surprises.

Starting with “Johnny’s Story” Part 1 (of 4) in October, readers will see The Karate Kid movie in a whole new light in this retelling through the eyes of Johnny Lawrence, two-time All Valley Tournament champion. When the new kid makes moves on the girl that broke Johnny’s heart, he vows to settle the score and win back his love… or so goes the story Sensei Lawrence tells his students nearly 35 years later.

“I saw The Karate Kid for the first time during a lock-in at the Y. The skeleton costumes captured my attention, while the Miyagi-isms pulled me into the story. And like everyone else at the time, I caught Karate Kid fever. Fast-forward 35 years, and being just a small part of the franchise has made me feel young and inspired all over again,” says Tipton.

“Cobra Kai has been a revelation to new and longtime fans alike,” says IDW Sr. Director of Licensing & Business Development, Eric Moss. “With its complex, layered characters and perfect blend of nostalgia and freshness, it begs for more stories—and IDW is honored to enter the ring. The action and philosophies of martial arts are tailor-made for comics, and, just like a bonsai, we look forward to firmly planting our roots in that world and branching off into wondrous new directions.”

Cobra Kai debuted on YouTube Premium on May 2, 2018, reigniting the 30-year rivalry between Daniel LaRusso (played by Ralph Macchio) and Johnny Lawrence (William Zabka), whose legendary conflict at the 1984 All Valley Karate Tournament was the climax of the beloved film, The Karate Kid. Their fates intertwined, the successful Daniel and redemption-seeking Johnny collide as they set forth teaching the next generation of “karate kids.”

Follow IDW on social media for the latest updates on new Cobra Kai comic books and trade paperback collections, available at comic specialty shops and booksellers beginning Fall 2019. Visit www.comicshoplocator.com to find a store near you!