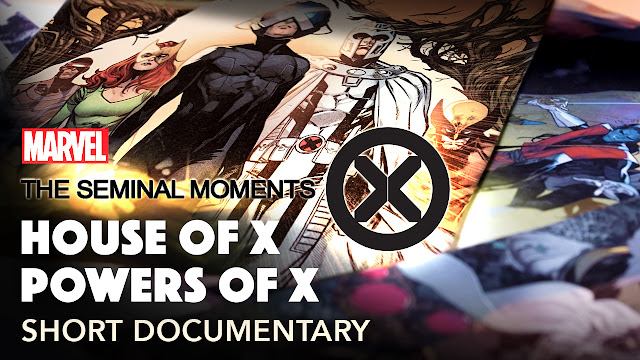 The next seminal moment in X-Men history debuts with House of X and Powers of X this July!

Just a month before the highly-anticipated debut of HOUSE OF X and POWERS OF X, Marvel released an all-new episode of X-MEN: THE SEMINAL MOMENTS featuring series writer Jonathan Hickman and other legendary Marvel creators as they shed light on what the future holds for mutants across the universe!

“There’s no alternate universe version of the X-Men that we’re doing – time travel, or any of that kind of stuff. This is a very cause and effect, very linear narratively straightforward story,” said Hickman. “I think the most important thing about X-Men is obviously the way that individual readers identify with the characters…my obligation is to be true to the character even though you’re putting them in new circumstances and be true to the spirit of what it means to write an X-Men book.”

HOUSE OF X and POWERS OF X – written by Jonathan Hickman with art by Marvel’s Young Gun Pepe Larraz, R.B. Silva, and colorist Marte Gracia – will build from every major X-Men milestone since 1963 up through the current X-Men series and storylines fans know and love, including some of Marvel’s most iconic characters from over the decades.

The next seminal moment in the history of the X-Men begins this July!

Launched in May, Marvel’s X-MEN: THE SEMINAL MOMENTS series celebrates the X-Men series that changed the Marvel Universe forever: Giant-Size X-Men, 1991’s X-Men #1, Age of Apocalypse, and New X-Men. Sponsored by this summer’s blockbuster HOUSE OF X and POWERS OF X series, these retrospectives take both longtime and new X-Men fans back to some of the greatest moments in the Marvel Universe, setting the scene for the most important story in the history of mutantkind. Each of these shorts feature voices from Marvel’s past and present – including legendary creators like Adam Kubert, Chris Claremont, Larry Hama, Jonathan Hickman, Al Ewing and more – as they look back and share their thoughts (and inside looks) into the most influential moments that redefined and reignited the X-Men, leading to bold new directions that drew in generations of fans around the world.