“SPIDER-MAN,” “ROCKETMAN” AND “GODZILLA” ARE SUMMER’S MOST ANTICIPATED BLOCKBUSTERS 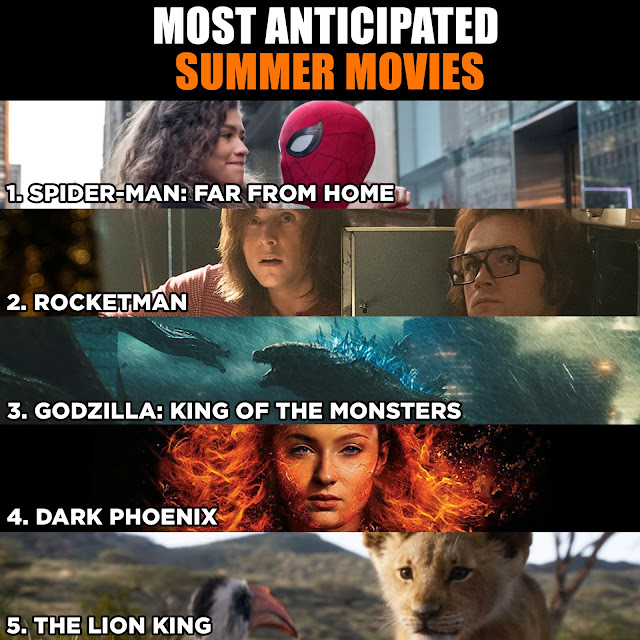 “SPIDER-MAN,” “ROCKETMAN” AND “GODZILLA” ARE SUMMER’S MOST ANTICIPATED BLOCKBUSTERS, ACCORDING TO MORE THAN 2,000 MOVIEGOERS IN FANDANGO FAN SURVEY

Fandango, the ultimate digital network for all things movies, revealed the results of its Most Anticipated Summer Movies Survey, in which Marvel’s “Spider-Man: Far from Home” (the first Marvel Cinematic Universe entry since the game-changing “Avengers: Endgame”) was voted the most anticipated blockbuster of the summer. In polling that concluded Monday, more than 2,000 fans on Fandango were asked to vote for movies they planned to see on the big screen between Memorial Day Weekend and Labor Day Weekend.
Moviegoers named Disney’s “The Lion King” and Disney Pixar’s “Toy Story 4” as the most anticipated family films, with Disney’s “Aladdin,” Illumination’s “The Secret Life of Pets 2,” and “Dora and the Lost City of Gold” following closely behind.
Fans voted for Chris Hemsworth (“Men in Black: International”), Brad Pitt (“Once Upon a Time in Hollywood”), and Tom Holland (“Spider-Man: Far from Home”), plus Zendaya (“Spider-Man: Far from Home”), Sophie Turner (“Dark Phoenix”) and Tessa Thompson (“Men in Black: International”) as the most anticipated actors in summer movies.
Richard Madden (“Rocketman”) and Naomi Scott (“Aladdin”) were selected as the hottest rising stars in the movies, while “Fast & Furious Presents: Hobbs & Shaw” bad guy Idris Elba was picked as top summer movie villain.
“‘Spider-Man: Far from Home’ is the most anticipated film of the summer due to the amazing resurgence of Spider-Man as a fan favorite on the big screen, and because it follows the events of ‘Avengers: Endgame,’ one of the biggest movies of all time,” says Fandango Managing Editor Erik Davis. “It’s also a great summer for action fans with the return of Marvel’s X-Men in ‘Dark Phoenix’ and the epic monster battles of ‘Godzilla: King of the Monsters.”  With so many stellar choices each weekend, like the music-fueled ‘Rocketman,’ and ‘Yesterday,’” plus family-friendly titles like ‘The Lion King,’ ‘Aladdin,’ and ‘The Secret Life of Pets 2,’ we expect to see summer moviegoers spending more time at the theaters than ever before.”
To help fans prepare for this summer’s biggest movies, FandangoNOW, Fandango’s streaming service, has curated a home entertainment collection of previous franchise installments that fans can rent or buy from one playlist at FandangoNOW’s Summer Blockbuster Catch-Up here, while Fandango’s Big-Screen Summer Movie Preview can be found here.
According to Fandango moviegoers, below are the top picks for the summer:
Most Anticipated Summer Blockbuster:
Most Anticipated Family Film:
Most Anticipated Live-Action Comedy:
Most Anticipated Movie Musical:
Most Anticipated Actress:
Most Anticipated Actor:
Most Anticipated Male Rising Star:
Most Anticipated Female Rising Star:
Most Anticipated Voiceover Performance:
Most Anticipated Villain: