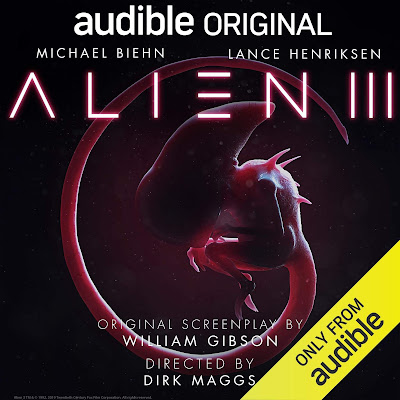 This year marks the 40th Anniversary of the Alien franchise. To honor the occasion, Audible is bringing author William Gibson’s lost script for Alien III to life for the first time in a full multicast audio presentation. Reprising their iconic roles from Aliens are Michael Biehn as Corporal Hicks, and Lance Henriksen as the android, Bishop.

Gibson’s script was written in 1987 as a follow-up to Aliens, but his version of the story never made it to the big screen. Over the years, the script was eventually leaked online giving fans a glimpse at what could’ve been.

The audio drama begins with a recap of key moments from Aliens, which is incredibly handy if it's been some time since you last saw that film. The most immediate change from the version of Alien 3 we got in theaters is that Hicks and Newt both survive. Together with Bishop, they are main characters in Alien III, while Ripley is sidelined in a coma. (From what I've heard in the past, Sigourney Weaver wasn't planning on being in Alien 3, so I imagine that explains Ripley's absence from Gibson's script.)

The general plot is as follows:

The Sulaco is adrift in space, and Hicks, Newt, Bishop, and Ripley are found in a sector of space under the control of the Union of Progressive Peoples (UPP). The UPP are enemies of corporations such as Weyland-Yutani (the Company of the first two Alien films). The UPP decides to check out the Sulaco, but things don’t go well for the boarding party. After being torn in half by the Alien queen in the finale of Aliens, a facehugger sought refuge in the android’s entrails. The boarding party is attacked, manages to escape, and takes Bishop off-ship. Hicks, Newt, and Ripley are left to drift.

The Sulaco eventually finds itself in range of a space station called Anchorpoint. This is where most of the action of Alien III takes place. The ship is picked up, boarded, and the survivors are brought back to Anchorpoint.

As in previous Alien installments, the potential for weaponizing the Aliens is too great to ignore for some on both sides — the UPP and representatives from the Company. The attempts at cloning the creatures turns out about as well as one would expect. I will stop there, as the story is worth hearing without spoilers.

I was never a big fan of Alien 3, even though I am fan of the Alien Franchise overall. To me, Gibson’s Alien III feels more part of the Alien universe. The threat feels more immediate and terrifying in this version. There are similarities to Prometheus, which is interesting. I’m not clear on whether Gibson’s script was an influence, but I feel it almost must’ve been to some degree. Perhaps someone knows for sure.

The dramatization is quality work. I’ve always loved radio dramas, and the way they make you use your imagination. The full cast is outstanding, but the added touch of bringing Michael Biehn and Lance Henriksen on board to reprise their roles was genius. Admittedly, they sound older — as we all do, right? But they stepped back into those characters easily and seamlessly. It can’t be easy to recover a role played so long ago, but both actors managed to “find” Hicks and Bishop again.

This Audible original production was directed ably by Dirk Maggs, and with a running time of 2 hours and 16 minutes, it’s the length of a solid feature film. Appropriate as this story was originally conceived as a script, not an audiobook. Once the story really started rolling, it moved along a nice clip. My attention was held throughout.

The production value for Alien III is top notch. I was listening via earbuds, and the immersion level was impressive. The sound effects, the sound levels, the clarity of the dialogue -- it all works in creating the proper environment for the listener.

Overall, my experience with Alien III was a positive one. I could easily envision this story on the big screen, and I wish it had come to fruition. The story just feels like a natural extension of both Alien and Aliens, and frankly I'd appreciate more in this vein.


Thank you to Audible for providing a copy of this audio for review purposes.