Captain Jack is back, and he’s never been better dressed! 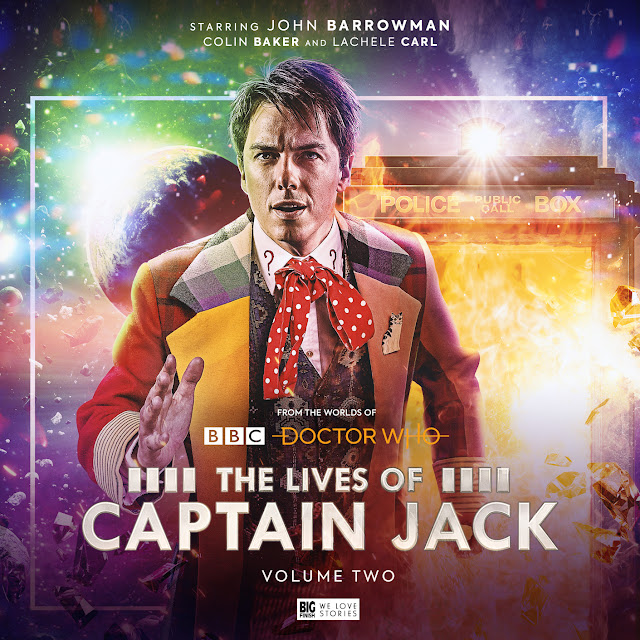 Here's our weekly news from audio drama experts, Big Finish.  This week we have news on Captain Jack from Torchwood.  Here's the press release:

Coming out in June 2019, Captain Jack Harkness and the Sixth Doctor swap coats in The Lives of Captain Jack Volume Two.

John Barrowman reprises his role as the dashing omnisexual Time Agent, Captain Jack, in a second volume of audio adventures from Big Finish Productions in association with BBC Studios.

1. Piece of Mind by James Goss

When the Sixth Doctor falls dying into his arms, Jack must carry on in his place. Is the universe ready for a whole new kind of Doctor?

On the battlefields of World War I, something is hunting in the trenches. Jack must try and save the life of a wounded soldier.

3. Driving Miss Wells by James Goss
Alien invasions, stolen planets and burning skies – Newsreader Trinity Wells used to tell everyone the world was ending. One day she stopped believing it. Will her new chauffeur change her mind?

John Barrowman’s Captain Jack made his memorable first appearance in television’s Doctor Who revival in 2005, inspiring head writer and executive producer, Russell T Davies, to create the spin-off series Torchwood for him.

Producer of The Lives of Captain Jack and Torchwood audio series at Big Finish, James Goss, tells us more about this second box set: "As we had such a great time doing the first volume it seemed a lovely idea to do another. Amazingly, John managed to find time for us AND capture a nation’s heart in the jungle. Hearing him face off against Colin Baker’s Doctor is the joy we’ve all been waiting for."