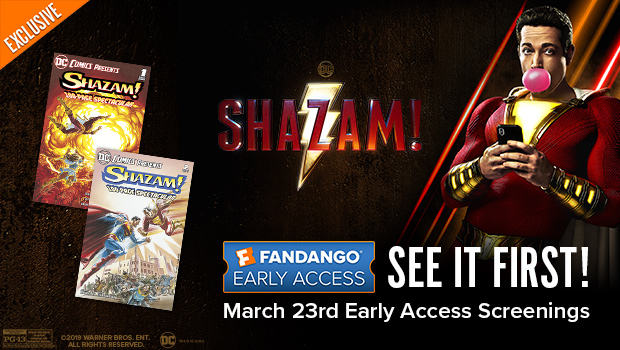 Fans and Fandango VIP Members Can Enjoy “Shazam!” on March 23 at More than 1,200 Theaters Nationwide – Tickets on Sale Today

Fandango, the leading digital network for all things movies, is teaming up with Warner Bros. Pictures to offer exclusive advance screenings on March 23 of "Shazam!," the newest DC Super Hero to hit the big screen and one of the most highly anticipated movies of the season. Tickets for this limited engagement go on sale today, exclusively for Fandango.

Nearly two weeks before the film's April 5 release date, fans and members of Fandango VIP, Fandango's free-to-join rewards program, can get a first look at the film in screenings taking place at approximately 1,200 select theaters and 40 exhibition circuits nationwide.

“We’re thrilled to work with Warner Bros. on our early access screening program, helping eventize movies and generate buzz before opening weekend,” says Fandango President Paul Yanover. “‘Shazam!’ is a film that appeals to the whole family, and we’re delighted that Fandango VIP fans will be among the first to see the film two weeks before it officially hits theaters.”

Jeff Goldstein, President, Warner Bros. Pictures Domestic Distribution, states, “Fandango is a terrific partner and we’re excited to work with them to bring this film to their VIP members ahead of release. ‘Shazam!’ is not only a great superhero action movie, but a really funny one, full of heart and charm, and we look forward to Fandango audiences being among the very first to experience it on the big screen.”

Fandango has a long tradition of working with the studios and filmmakers on programs to surprise and delight moviegoers, and this is the second of multiple early access screenings Fandango is planning for 2019. In February, Fandango offered early access screenings of DreamWorks Animation’s “How to Train Your Dragon: The Hidden World,” which were received with great success.

For every movie ticket purchased on Fandango, Fandango VIP members also receive 125 Points. Once members reach 500 Points, they will receive a five-dollar reward redeemable for more movies - either for future movie-ticket purchases or for digital-movie purchases and rentals on FandangoNOW. In addition to earning points on Fandango, Fandango VIP members can also link their other theater rewards cards, including AMC Stubs, Cinemark Connections, Regal Crown Club and others, for even more benefits.

About “Shazam!”
We all have a superhero inside us, it just takes a bit of magic to bring it out. In Billy Batson’s case, by shouting out one word—SHAZAM!—this streetwise 14-year-old foster kid can turn into the adult Super Hero Shazam, courtesy of an ancient wizard. Still a kid at heart—inside a ripped, godlike body—Shazam revels in this adult version of himself by doing what any teen would do with superpowers: have fun with them! With the help of superhero enthusiast friend Freddy, Shazam sets out to test the limits of his abilities with the joyful recklessness of the child he is inside. But he’ll need to master them quickly to fight the deadly forces of evil controlled by Dr. Thaddeus Sivana, who’s got his eye on Shazam’s powers and wants them for himself.

A New Line Cinema presentation, “SHAZAM!” will be distributed worldwide in 2D and 3D in theatres and IMAX by Warner Bros. Pictures. The film has been rated PG-13 for intense sequences of action, language, and suggestive material. www.ShazamMovie.com