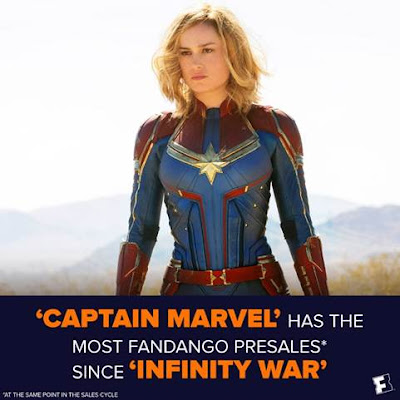 Fandango, the ultimate digital network for all things movies, reported that “Captain Marvel” is currently the biggest advance ticket seller since “Avengers: Infinity War” at the same point in the sales cycle. Opening in theaters this Friday, the newest installment to the Marvel Cinematic Universe is pacing to surpass Fandango presales for any other movie since the release of “Infinity War” in April 2018.

“There’s a reason ‘Captain Marvel’ is Fandango’s fastest preseller since ‘Infinity War’: fans can’t wait to experience the nostalgic ‘90s vibe of the film and to see Brie Larson as one of the most powerful and relatable superheroes we’ve seen on the big screen,” says Fandango Managing Editor Erik Davis. “With ‘Endgame’ approaching, fans are also rushing to the multiplex to find out how ‘Marvel’ fits into the ‘Avengers’ storyline, plus they can’t wait to see Goose, the scene-stealing cat.”

According to Fandango’s survey of over 1,000 moviegoers: