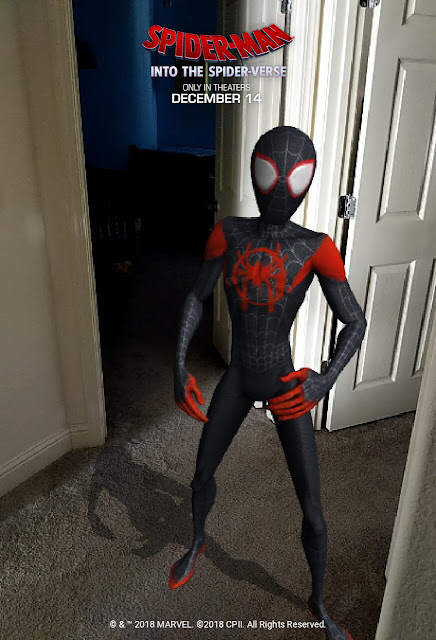 In anticipation of the nationwide release of Sony Pictures’ Spider-Man: Into the Spider-Verse, 8th Wall and Trigger today announced the launch of the film’s Mobile Web AR Experience. The immersive AR camera is built using 8th Wall Web and Amazon Sumerian technology running on Amazon Web Services (AWS) and is designed to let users interact with Spider-Man in augmented reality (AR) where they can take pictures and share them with friends.

The Spider-Verse Web AR Experience, powered by 8th Wall Web and Amazon Sumerian technology and produced by Trigger, is designed to allow users to easily jump directly into Spider-Man’s AR world on any smartphone, without having to download an app.

“Spider-Man is a perfect match for AR not only because his acrobatic moves and iconic poses lend themselves well to the format, but because he’s one of the most relatable superheroes,” said Rose Phillips, SVP, Digital Marketing at Sony Pictures Entertainment. “We’re excited to collaborate with 8th Wall, Amazon Sumerian and Trigger on Spider-Verse Web AR Experience and bring it to all – and new – Spider-Man fans.”

Phil Lord and Christopher Miller, the creative minds behind The Lego Movie and 21 Jump Street, bring their unique sensibilities to a fresh version of a different Spider-Man Universe, with a groundbreaking visual style that’s the first of its kind. Spider-Man™: Into the Spider-Verse introduces Brooklyn teen Miles Morales, and the limitless possibilities of the Spider-Verse, where anyone can wear the mask. Directed by Bob Persichetti, Peter Ramsey, and Rodney Rothman from a screenplay by Phil Lord and Rodney Rothman and story by Phil Lord, the producers are Avi Arad, Amy Pascal, Phil Lord & Christopher Miller and Christina Steinberg.

“The Spider-Verse Web AR Experience demonstrates how established brands can dramatically enrich their customer experiences and better engage with their fans,” said Erik Murphy-Chutorian, CEO at 8th Wall. “Augmented reality allows consumers to dive deeper into the worlds of their favorite products and characters. Sony Pictures has deepened and enriched the Spider-Man experience with the innovative work they’ve produced with Trigger and 8th Wall, and powered by AWS. It’s the perfect example of how AR for the web is the best new medium for brands to make their content come to life while increasing the accessibility and interactivity of their stories.”

"Spider-Man is in our DNA. My team has been a digital developer since the first Spider-Man film and Trigger has been developing AR for Spider-Man properties at Sony Pictures since 2014. We're excited to continue this longstanding collaboration with this experience for Spider-ManTM: Into the Spider-Verse,” says Jason Yim, CEO and Executive Creative Director for Trigger. “We believe Web AR is the final barrier for mass adoption of AR and we are honored to be part of the first large-scale web AR campaign with Sony Pictures, AWS, and 8th Wall as partners. Web AR will not only become the first entry to AR for most audiences, but it will build a foundation of behavior that will lift adoption in social, mobile and head mounted AR."

“Mobile Web AR is making possible for Sony Pictures to bring people into the world of Spider-Man and engage with the character like never before,” said Kyle Roche, General Manager, Amazon Sumerian, Amazon Web Services, Inc. “Using Amazon Sumerian, the teams at 8th Wall and Trigger were able to deliver an immersive browser based AR experience and do so without any specialized programming or 3D graphics expertise. Together with Sony Pictures, we’re changing the way fans experience their favorite web slinger.”

Be part of the experience by visiting intothespiderverse-ar.com/