Reign of the Supermen Review. 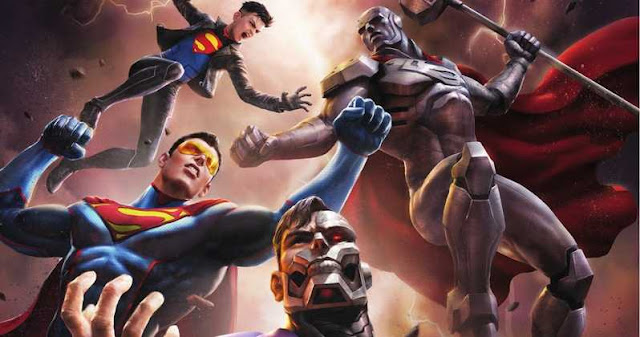 Reign of the Supermen Is Tripping Over Supermen

Reign of the Supermen continues from last year's other DC animated movie "The Death of Superman." in which we witnessed Superman coming off second best to Doomsday.  DC fans would have been familiar with the story.  However, Reign of the Supermen gives a little more original story to the fans.

There's one thing Reign of the Supermen has and that's action.  With Superman off the scene, the world still needs a superman of sorts so step in.  As a result we have a number of options.  Lex Luthor with his clone, Superboy (Cameron Monaghan.) He's like a young Peter Parker eager to impress but at the same time conflicted that he is associated with Luthor.  We also get an armoured Superman (Cress Williams.) He's a bit like The Guardian from Supergirl.  The Eradicator (Charles Halford) and the last fake Superman is a cyborg Superman.  For spoiler reasons I won't tell you anything about him (Jerry O'Connell and Patrick Fabian.)  Four fake Supermans and all wanting to be the one that "protects" Metropolis.  Obviously four into one doesn't go and on top of that we also get The Justice League making an appearance with Batman, Wonder Woman, The Green Lantern and The Flash.

So you can see there's quite a cast.  The story is interesting enough and at just over 80 minutes the

animated movie doesn't outstay its welcome.  Pacing is done rather well for an animated feature with the director taking time outs at the right places in the movie for the viewer to catch their breath.  It also gives a chance for some character development.  For example we get to share some grieving with Lois Lane who is excellently played by Rebecca Romijn.  Actually, this incarnation of Lois Lane has to be one of my favourite versions for quite some time.  She's not just the hard hitting reporter but we get to see a human being with actual real feelings.

Another stand out from Reign of the Supermen is the soundtrack.  Frederik Wiedmann once again picks up the baton and is no stranger to DC animated features.  He is the John Williams of animated superhero movies and like Williams, he consistently delivers a top quality soundtrack that is suited to the action packed scenes but at the same time we get a mix of Americana that is often associated with Superman.

Reign of the Supermen is an action-packed movie and one that anyone can watch, not just DC fans.  If you're not familiar with the back story of Superman then all you need to know is Superman is off the scene due to a previous battle.  You'll still enjoy the story.  There are some genuinely beautiful scenes and if you're familiar with the old Superman movies then the last scene will give you goosebumps.

Reign of the Supermen is fast paced and action-packed and takes full advantage of the DC universe but at the same time allows things to slow down to give essential character development.  Recommended viewing.