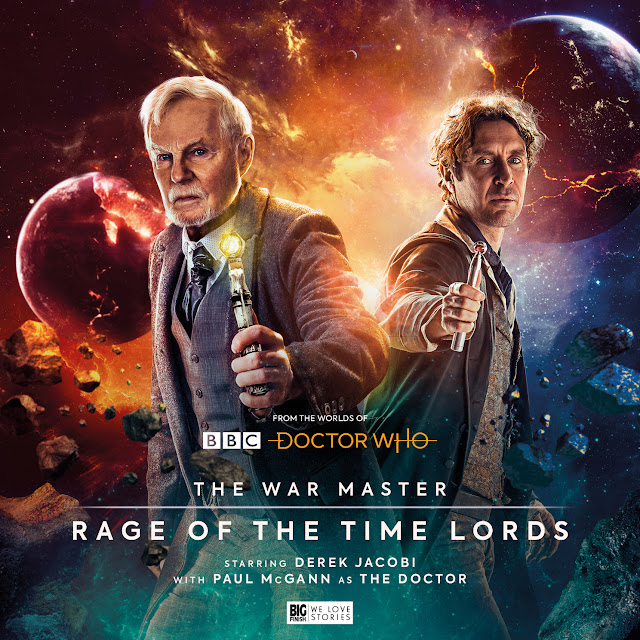 In a climactic audio battle the Eighth Doctor (Paul McGann) takes on the War Master (Derek Jacobi) in The War Master: The Rage of the Time Lords, coming out in July 2019 from Big Finish Productions.

The Time War is almost upon us and the Master is ready… and not even the Doctor will be able to stop him.

Sir Derek Jacobi reprises the role of the War Master opposite Paul McGann as the Eighth Doctor in the third series of The War Master audio adventures made in association with BBC Studios.


In The War Master: The Rage of the Time Lords, four new stories explore the Master’s exploits in the Time War.

With all of space and time in chaos, the Master plots his most audacious project yet. Only one other Time Lord has ever been able to stop him. But where is that Time Lord when the universe needs him?

This new series of adventures take the Master into darker terrain as he gathers his forces against the Daleks in one of his most nefarious schemes to date. Will the Doctor stop him? Will he want to? Or has the Master’s deadly scheme proved too great to be controlled…

Producer and director Scott Handcock told us more: “This incarnation of the Master is very much the ‘Hannibal Lecter’ of Time Lords – intelligent, charming, but thoroughly ruthless. We had a lot of fun in studio bringing the War Master back to life! It’s been a gift of a project, and we can’t wait for listeners to hear it.”

Sir Derek was only seen on screen for one TV episode. On returning to the role on audio in 2017, he said: “I didn’t expect to come back to it all these years later but I was thrilled to be remembered. The plots in all these episodes have been very good indeed, very interesting, very dramatic and beautifully written. The whole process has been a delight!”

The War Master: The Rage of the Time Lords is being released in the 20th anniversary year of Doctor Who on audio, and it showcases some of the best qualities of the format. One of the greatest delights for Big Finish is being able to further explore and add to the mythology of characters such as the Eighth Doctor and the Master.

Series three, The War Master: Rage of the Time Lords will materialise in July 2019 written by Tim Foley and David Llewellyn. Series four, The War Master: Anti-Genesis written by Nicholas Briggs and Alan Barnes, will complete the saga in December 2019.

Or why not save money in a specially-priced War Master bundle with all four series at £90 on CD or £80 on download. If you’ve previously purchased the first series, The War Master: Only the Good, you can get series two, three and four at £68 on CD or £60 on download.