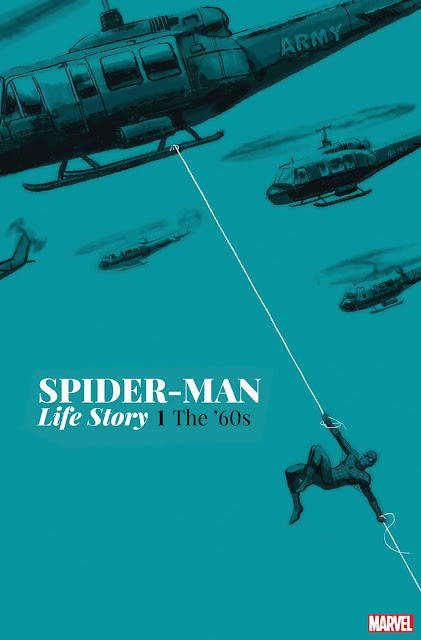 An all-new adventure from Chip Zdarsky and Mark Bagley!

In 1962, the world watched as teenager Peter Parker was bitten by a radioactive spider…allowing him to become the Amazing Spider-Man! It’s been fifty-seven years since the AMAZING FANTASY #15, the story that brought everyone’s favorite wall-crawler into the Marvel Universe and jumpstarted some of the most adventurous super hero stories ever -- but what if Spider-Man had aged at the same rate as our world?

Join acclaimed writer Chip Zdarsky (Peter Parker Spectacular Spider-Man, Marvel 2-In-One) and superstar Spider-Man artist Mark Bagley (Amazing Spider-Man, Ultimate Spider-Man) for SPIDER-MAN: LIFE STORY – a tale encompassing the entire history of Spider-Man from beginning to end, set against the key events of each decade! As the series kicks off in March, the year is 1966, and Peter Parker must determine where his power and responsibility truly lies as the nation becomes embroiled in the Vietnam War.

“I guess I’m just not done with Spidey! This is an idea I’ve had since I first started working for Marvel, something that explores the characters and the Marvel universe on a deeper level, where time changes both the characters and the world,” said series writer Chip Zdarsky. “Being able to span decades with one of the most iconic Spider-Man artists ever, Mark Bagley, is surreal. He’s creating fresh takes on classic characters and moments in really dynamic ways.”

Grab some webbing and swing through history with Peter Parker in this special, high-end limited series, debuting as part of the celebration of Marvel’s 80th anniversary! It all begins this March in your local comic shops.