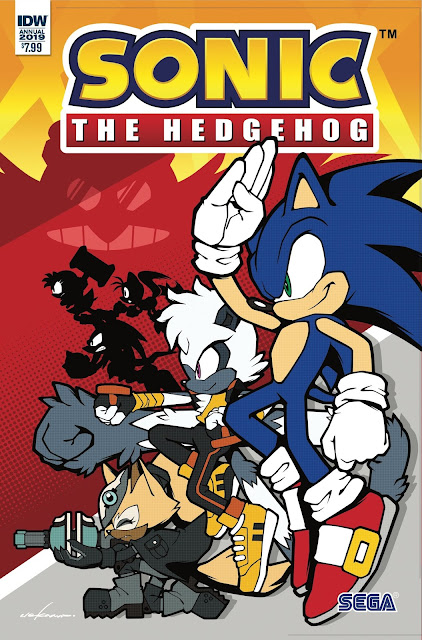 Arriving in March 2019, the 48-page annual features the odd couple of Tangle the Lemur and Whisper the Wolf in the lead story, teaming up to save a friend in need. Additional stories see Sonic and Tails taking the Tornado out for a spin, Silver and Blaze planting a garden, the Sonic Fan Club holding their first official meeting and Rouge the Bat hunting for treasure!

James Kochalka said, “Between playing the games and reading the comics, my mind has been living in the world of Sonic The Hedgehog for several decades, so it’s wonderful to finally be able to actually contribute to that world.”

Ian Flynn said, “It’s been thrilling to be part of IDW’s run-away hit Sonic The Hedgehog, and I’m super-excited to spend more time with the brand-new fan favorites Tangle and Whisper!”

Sonic The Hedgehog Annual 2019 will be available with three variant cover artists: Jennifer Hernandez, Nathalie Fourdraine, and – as a special treat for fans of the Sonic games – Yuji Uekawa of Sonic Team, celebrated as the visionary behind the look of “modern” Sonic The Hedgehog!

“I am really happy to draw IDW’s original characters altogether with Sonic and his friends, as I had never imagined that I would draw these characters as official artwork,” said Uekawa. “As with many IDW Sonic series fans, I personally love Tangle and Whisper, and I am very much looking forward to seeing their further adventures with Sonic, as well as seeing original characters in future issues!”

For information on how to secure copies of Sonic The Hedgehog Annual 2019, please contact your local comic shop or visit www.comicshoplocator.com to find a store near you.