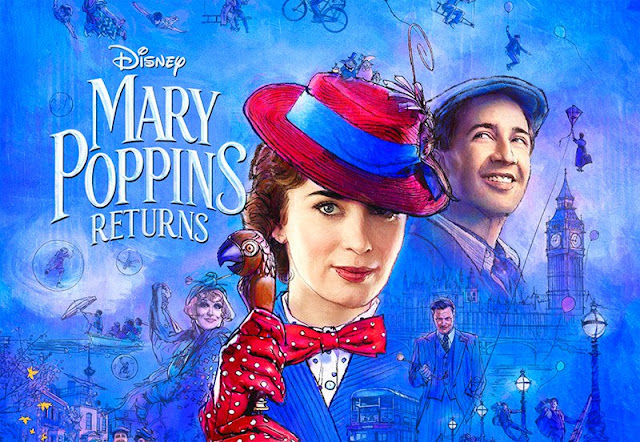 
If there is one larger than life big screen legend that is an even more sacred a part of out childhood than Indiana Jones and Superman, it would have to be Mary Poppins. In fact, our first major endeavour into indie film making was a sequel about her son, Harry Poppins, that was essentially Mary Poppins done as a Bill Murray movie, but with stuffed animals (we were not even ten years old yet, and sadly the complexity of the puppeteering led to the film never getting finished . . . actually, that may be a good thing . . .).  But the point is that we knew the original backwards and forwards, lived and breathed it, and that sense of ownership of it is hardly unique to us. Mary Poppins wasn't just Jane and Michael's nanny: she was everyone's nanny, and a member of everyone's family, and the film was a major part of our childhood. What's more, unlike say, Pete's Dragon, it only gets better, taking on new dimensions and nuances as one gets older, growing up with you and becoming almost a new movie. For some of us, it was through this movie that we really grew to understand that a parent who spent all of their time at work did so because they loved us, not because they wanted to get away from us. And as we got older, it served as a cautionary tale about not forgetting about how we felt before we learned that fact and never taking children (or childhood) for granted. It's a classic in the truest sense of the term, and not a movie to be messed with on a whim for pure profit based reasons.

It's important to understand that  Mary Poppins Returns is not a remake or re-imagining like the rest of the new spate of Disney films. It's more akin to The Force Awakens than to the live action Beauty and the Beast. The comparison to the new Star Wars films may not be encouraging to some, but it's an apt one. Mary Poppins Returns follows the same story beats as the original for the most part, but creates so much magic and the feelings that it conveys are so sincere that it isn't a bad thing. It also deals with new and very poignant aspects of childhood, adulthood and everything in between.

The film takes place in 1930's London (which is the time period of the original novels by P. L. Travers), and follows Michael (Ben Whishaw) and Jane Banks (Emily Mortimer), who are now grown up. Michael is living with his three children (Pixie Davies, Nathanael Saleh, and Joel Dawson) and housekeeper Ellen (Julie Walters stepping into the role originated by  Hermione Baddeley), in Number 17, Cherry Tree Lane. Michael has suffered the painful loss of his wife, and Jane is there every day to help the family through this difficult time. But when Michael falls into a dire financial straights, more help is needed, and through a stroke of magic, Mary Poppins (Emily Blunt) comes back to "watch over the Banks children". Mary Poppins and the three children have all new adventures, joined by a street lamplighter named Jack, and an eccentric cousin named Topsy (Meryl Streep).


Director Rob Marshall hasn't been given a project this utterly perfect for him (or this inspired) since Chicago, and he takes an old fashioned approach to the movie musical. It's spirited and precise, filled with energy and charm, and the look is marvellous down the last minor detail. The screenplay by David Magee (Finding Neverland, Life of Pi) and the music and lyrics by Marc Shaiman and Scott Wittman are spot on in terms of catching the spirit of the material. The entire creative team is very clearly committed to making a film worthy of the mantle they are taking on, and none more seriously than Emily Blunt. The task of stepping into Julie Andrews' shoes is monumental, and it's the kind of difficult balancing act between impersonation and acting that Karl Urban has made his niche. Blunt wisely chooses never to go so on the nose with the impersonation that it feels hammy, and she is aided by the fantastical nature of the character and by the theatricality of the musical genre. It allows for a performance that is heightened in some respects, but Blunt keeps the character grounded in a sense of heart and humanity. When Blunt sings the beautiful and introspective Where The Lost Things Go, she's taking Mary Poppins to new frontiers of emotional wisdom, and Andrews herself couldn't have done it any better.


Lin-Manuel Miranda plays Jack, the "Leerie" who once worked for Bert. It's essential to note that the character is not Bert, nor is Miranda meant to be Dick Van Dyke (if his cockney accent bugs you, remember Van Dyke's before you judge him too harshly). The multi-talented creator/star of Hamilton brings a charismatic presence to the film, and if you feel that he is not nearly as funny as Van Dyke was, it is important to remember that he's really not trying to be. There is only one Dick Van Dyke, and his brief appearance in the film (as Mr. Dawes, Jr.) is a major highlight, and all we needed to keep his spirit a part of things. One of the wisest choices Marshall made in this whole film was in not trying to figure out who could come closest to the Van Dyke type in casting Jack (start trying to come up with names, and we defy you to think of one whose own star persona would not have become a distraction) . Miranda is no Bert, but he's a terrific Jack. He melds surprisingly well into the film while adding just enough of himself to please his fans (the "Royal Doulton Music Hall" sequence is a real gem that gives Miranda a chance to very subtle reference his Hamilton schtick and Blunt a chance to channel Catherine Zeta Jones in Chicago, both without every stepping even a foot out of place. Most audiences won't even notice the references).

Academy Award Winners Colin Firth and Meryl Streep add a lot to the film without pulling focus (it's hard to picture anyone else pulling off Firth's character without it being too much), and Ben Whishaw and Emily Mortimer embody the characters of Jane and Michael perfectly.  The unmarried and totally happy with who she is Jane has inherited her mother's enthusiasm for social causes. The way this aspect of the character plays out nicely exercises the last remnant of discomfort many have had over whether the original was unkind to Mrs. Banks for her preoccupation with her feminist endeavours, and the strong, independent female voice of the family is perhaps stronger than ever. Michael's three children are adorable and intelligent and the young actors do a terrific job, making them relatable to both adults who care about them and children who will identify with them. They also get some very nice proactive moments, and along have a wonderful sense of spunk that nicely reflects the fact that these children were raised by parents (and an aunt) who were less concerned about propriety (the influence Mary Poppins had on Jane and Michael is evident in the three kids).

What makes Mary Poppins Returns so special (and so needed) is the unbridled sense of joy and optimism it brings to everyone watching it. It has suspense and action, but it's all non violent and family friendly In these so frequently joyless and decisive times, it's a major boost to the spirits and a reminder that love, goodness and fun do still exist, and it's up to us to hold onto it spread it wherever and whenever we can. It never settles for "good enough", nor does it feel like a movie made by committee.  This is by far one of the top films of the year, and a highlight of the holiday season, a timeless gift that cold not come at a better time, and it should  be enthusiastically unwrapped and enjoyed by all.