Movie Review: "Into The Spider-Verse" is 2018's Most Surprising Classic 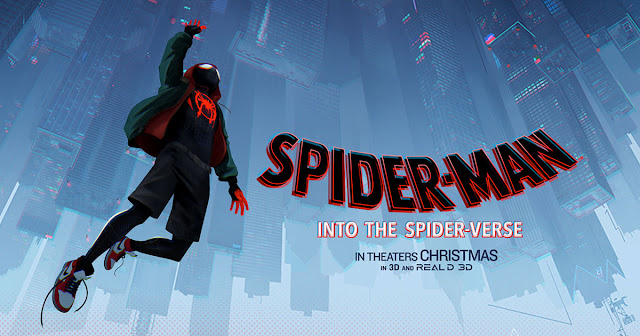 By this point in time, it is very hard not to enter into anything with the words "Sony" and "Spider-Verse" without trepidation. The only way to compliment any post Spider-Man 2 movie from the studio (Spider-Man: Homecoming notwithstanding, as it is really a Marvel Studios product) is by comparing it to one of the others that is even worse. Then there's the fact that no one has even tried a theatrical animated movie based on a major superhero since Batman: Mask of the Phantasm bombed 25 years ago (though it has become a cult favorite over time, and the straight to video world has done well enough with the genre).There was plenty of reason for scepticism, even apathy, about Spider-Man: Into the Spider-Verse,  which seemed like at best a redundant project when it was announced, and even a lot of the hardcore geek movie crowd haven't really had their Spidey senses tingling about it.


The film centers on Miles Morales, a character created in 2011 by writer Spider-Man writers Brian Michael Bendis and artist Sara Pichelli, who was inspired both by President Barack Obama and American actor/rapper Donald Glover (who wore a Spider-Man costume on an episode of Community and became the subject of Internet campaign for a black actor to play Spidey. Miles first appeared in Ultimate Fallout #4 (August 2011), following the death of Peter Parker. An Afro-Latino teenager, he existed in a separate continuity from the mainstream Marvel Universe.

Bitten by a radioactive spider in the subway, Brooklyn teenager Miles suddenly develops mysterious powers that transform him into the one and only Spider-Man. When he meets Peter Parker, he soon realizes that there are many others who share his special, high-flying talents. Miles must now use his new found skills to battle the evil Kingpin, a hulking madman who can open portals to other universes and pull different versions of Spider-Man into our world.

Into The Spider-Verse is wildly inventive, action packed and hilariously funny. It also captures the classic comic book feel better than any superhero film in recent memory, even succeeding in some of the same stylistic experiments that Ang Lee wasn't quite able to pull off in Hulk. The difference here is that where Lee tried allude to the panel approach, he wasn't fully committed to embracing the comic book look and it came off as more of an allusion to television's 24. Spider-Man: Into The Spider-Verse goes all out, at times even giving us word balloons and the whole enchilada. But these off the movie doesn't jump straight into such extremes, but rather has them start building after Miles is bitten by the spider, metaphorically suggesting he is suddenly now living in a comic book world.

The ensemble of characters is a blast, especially most of them are variations on Spidery himself. Jake Johnson captures the sarcastic, smart alec side of Peter Parker far better than we've ever seen on film. He's the opposite of Tom Holland's wide eyed, naive Spidey: this is the weary and frustrated grown Spider-Man of the '80's and '90's comic strip who has committed to trying to balance both his relationship and his higher calling, but not managing either very well. Hailee Steinfeld's Gwen Stacy is a much better character than either Bryce Dallas Howard or Emma Stone were ever given, and John Mullaney's Peter Porker/Spider-Ham is outrageously goofy. But the scene stealer is Nicolas Cage as Spider-Man Noir, a hard boiled 1930's detective that comes from a black and white dimension. But coming in a close second would be Lilly Tomlin's Aunt May, though Bryan Tyree Henry and Mahershala Ali also do great work as Miles' father and uncle, respectively.

The screenplay by Phil Lord and Rodney Rothman is smart and very, very funny, and full of winking references to Sam Raimi films. It's also as sensitive as it is funny, building great character relationships and some nicely tender moments. The direction is nothing short of inspired, credited to Bob Persichetti (who wrote Netflix's beautiful version of The Little Prince), Rothman (co-writer of 22 Jump Street) and Peter Ramsey, who helmed one the most underrated superheroes films of the past 10 years, Rise of the Guardians. This is truly a film where all of the elements come together like a symphony.

The constant stream of superhero movies may be annoying audiences and critics a bit, but it's awfully hard to argue against it when we're getting movies like Spider-Man: Into The Spider-Verse stacked up against movies like Mortal Engines. If we are ever going to get more variety in theaters, we're going to have to see a lot more filmmakers and studios trying to make non comic book blockbusters that are anywhere near as smart and fun as Into the Spider-Verse or Black Panther.  Until then, we say don't blame the supers: with great power comes great responsibility, and and it is time for the rest of Hollywood to start rising to the occasion.