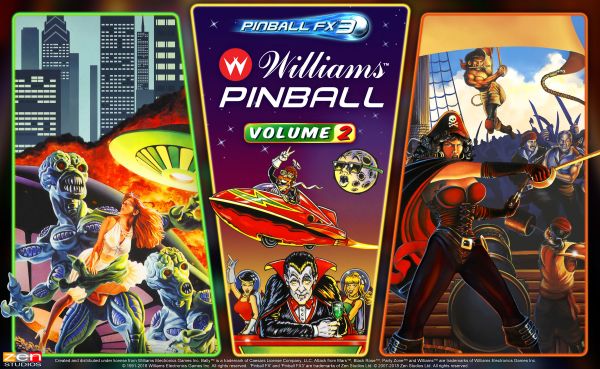 Zen Studios is happy to announce that The Party Zone™, Black Rose™ and Attack from Mars™ will soon join the quickly growing Williams™ Pinball collection for Pinball FX3 on PlayStation 4, Xbox One, Windows 10, Steam and Nintendo Switch. Coming December 4, 2018 for $9.99, the Williams™ Pinball Volume 2 three-pack once again includes classic simulations and remastered versions of each table.

Just as Williams Pinball Volume 1 featured a dragon bursting to life and a fisherman reeling ‘em in, the remastered 1990s classics in Williams Pinball Volume 2 are enhanced in similar ways. In The Party Zone, host Captain B. Zarr comes to life as a 3D interactive character parading around on a giant rocket, while Attack from Mars fires missiles upon a flying saucer circling the playfield, thanks to the orders barked by a 3D-animated general. At the same time, Black Rose, Queen of the High Seas, captains her fully 3D-animated ship across a spinning globe as you loot a treasure chest and fire an interactive cannon. Of course, classic simulations are still available for anyone craving the most authentic arcade experience.

“The overwhelmingly positive response from the pinball community since the launch of Williams Pinball Volume 1 has resulted in people of all ages and skill levels experiencing classic premium pinball in exciting new ways,” said Mel Kirk, Vice President of Publishing at Zen Studios. “Williams Pinball Volume 2 brings players a set of classic Bally tables – with themes everyone loves, like alien invasions, pirates and…well, partying – and I am thrilled that these games have found a home in Pinball FX3.”