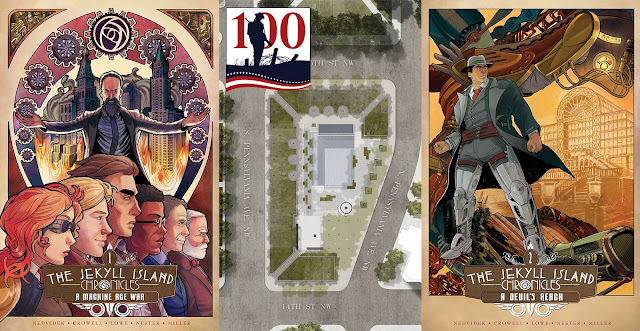 With its second volume landing in bookstores everywhere this week, The Jekyll Island Chronicles is an award-winning series of alternate-history graphic novels, featuring an unlikely band of World War I veterans who continue to serve their country by battling an anarchist cabal in a post-war era of invention.

On the centennial of the end of that war, the creators and publishers of the series have prepared a very special way for readers to join in honoring the heroes of “The Great War.”

"This Sunday marks the 100th anniversary of the end of World War I," says Top Shelf Editor-in-Chief Chris Staros. "In all that time, there has never been a national memorial in our capital dedicated to the millions who served and sacrificed. So as The Jekyll Island Chronicles brings new light to that era, the Top Shelf/IDW publishing family is proud to assist."

Through the end of 2018, a portion of every purchase of The Jekyll Island Chronicles, whether in print or digital, will go toward helping complete the National WWI Memorial in Washington, DC.