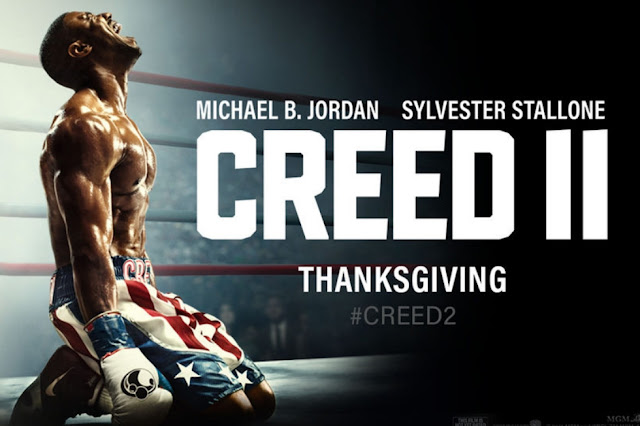 The fact that the Rocky formula has gotten us to an 8th movie in the official franchise, to say nothing of the countless imitators, speaks volumes for how well it works, regardless of how predictable or (at times) cheesy, it may be. Ryan Coogler's Creed took Rocky Balboa back to the Oscars, where he got his start, but that's not going to be happening again. It's not that Creed II isn't good, but where the first film was a reboot and revitalisation of Sylvester Stallone's most beloved franchise, this one is just another sequel. That's the bad news. The good news is that it's a really, really good sequel.

Thirty Christmas movie seasons ago, the Rocky series reached its box office plateau while simultaneously jumping the shark in one of the quintessential films of the Reagan era.
Rocky IV featured a Soviet boxer named Ivan Drago (Dolph  Lundgren) killing former heavyweight boxing champion Apollo Creed during an exhibition fight in Las Vegas. But the Italian Stallion, Rocky Balboa (Stallone) beat Ivan Drago in a boxing match on Christmas Day in the Soviet Union. Also, somewhere in there, Rocky bought Paulie a pet robot, which Paulie essentially made his mistress.


As Creed II opens, Adonis "Donnie" Creed. (Michael B. Jordan), son of Apollo, captures the heavyweight title with Rocky as his trainer. He also decides that it is time to propose to his girlfriend Bianca (Tessa Thompson), reasoning that she is starting to get offered enough high profile roles opposite Chris Hemsworth that he needs to seal the deal in order to be certain she is still around for Creed III. But if there is one thing we know from watching these films, it is that boxers are like old west gunfighters: there is always some young punk looking to take away the title of heavy weight champ or fastest gun. This time, it is Viktor Drago (Florian Munteanu), Ivan Drago's son, who has traveled to America with his Popsky in order to restore the Drago name to its former glory (because somehow, in the world of boxing, showing up after three decades to say "Hey, know how my my Dad killed your Dad one time? Well, I bet I can beat you up" is a legitimate path to glory.

Rocky is still filled with regrets over not stopping Apollo's last fight, and he doesn't want any part of this, so when Donnie accepts the challenge, he is forced to go to Tony "Little Duke" Evers (Wood Harris), the son of Apollo's former trainer (yes, Daddy issues are in fact a recurring theme, now that you ask). We're not going to give away how the fight turns out except to say that it takes place in the first half of the movie and that there is a rematch (that is only a spoiler if you have never seen or known anyone who has ever seen a boxing movie.).

But if you are a Rocky fan, you also know these movies are as much about the fight going on outside the ring and even inside the fighter as they are about the rousing fisticuffs finale. And both Donnie and Rocky have many opponents to take on, whether it is Donnie becoming a father for the first time or Rocky trying to face the reality that he really hasn't been a very good one to his own son, Robert  (Milo Ventamiglia, returning to the part he so memorably played in Rocky Balboa) to Ivan's desperation to give his son back the life he lost when his state sponsored superstar athlete status was destroyed by his loss to Rocky and the end of the Soviet Union (though the latter is more or less ignored).


The actors have all become very acquainted with their characters as people over the years, and the interaction between them is great. By far the biggest surprise is just how good Lundgren is this time around, diving into the inner struggles and pain of a character who only had one brief moment in the original where he got to indicate there was anything going inside his head apart from confusion. It feels more than a bit dubious to say that Lundgren has become a real actor since then, because Masters of the Universe, The Punisher and even Universal Soldier were not exactly prestige projects, and the Expendables films, In The Name of the King 2 and Female Fight Club (yes, that's a real movie)  haven't exactly been part of a new Renaissance.  But he's been working steadily for over 30 years, and much like Drago, he has been resigned to being what people want him to be. Lundgren is a smart guy, and the chance to go a lot deeper with the character that made him famous is the reason he is here. Munteanu makes for a strong present as Viktor, and the relationship between them is one of the best elements of the film.

Jordan and Stallone still have terrific chemistry, with both at their most interesting and likable when  focused on the mantle of fatherhood and what it means to them. Thompson lights up the screen even when she is doing her awkward auto tuned "music", and Phylicia Rashad . . . well, honestly, she has a really tough job just trying to  make her character distinct enough to keep you from getting distracted every time she comes on screen with the thought of whether or not her television ex-husband has thought of putting up a poster of Lena Horne to cover up the tunnel he is digging with used Jell-O Pudding Pop sticks. But the mere fact that she even comes close to succeeding says a lot about just what a charismatic actress she is, and it's fun to see her get some screen time with Thompson and even Stallone this time around (though the first meeting of the latter since Apollo's funeral should have been a much more dramatic moment). Director Stephen Caple, Jr. isn't an innovative auteur on the level of Ryan Coogler, but he's slick and very capable. Composer Ludwig Gorannson once again brings a soaring, at times almost operatic beauty to the soundtrack (along with the steady stream of hip hop that has replaced the doo wop of the '70's films and the pop rock of the '80's).

Creed II delivers on all realistic expectations, and rises above the vast majority of fears of what sequelitis could do to it.  While the original managed to rise above being merely a Rocky sequel, this one is content with its place as of the very best of them. And that's not a place for any movie to be.