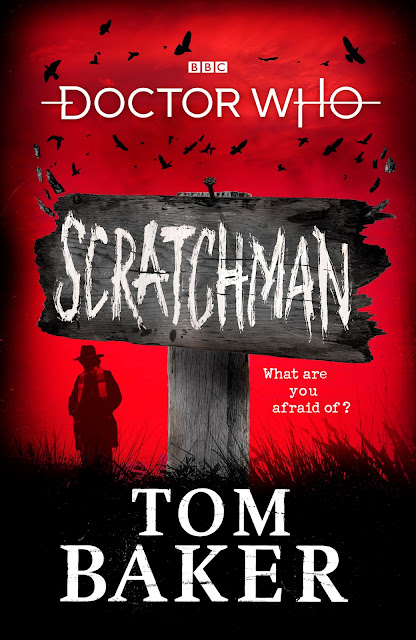 A story so epic it was originally intended for the big screen, Scratchman is a gripping, white-knuckle thriller almost forty years in the making.

What's the Plot?
The Doctor, Harry and Sarah Jane Smith arrive at a remote Scottish island, when their holiday is cut short by the appearance of strange creatures – hideous scarecrows, preying on the local population. The islanders are living in fear, and the Doctor vows to save them all. But it doesn’t go to plan – the time travellers have fallen into a trap, and Scratchman is coming for them.

With the fate of the universe hanging in the balance, the Doctor must battle an ancient force from another dimension, one who claims to be the Devil.

Scratchman wants to know what the Doctor is most afraid of. And the Doctor’s worst nightmares are coming out to play…

What Does Tom Baker Have To Say About The Book?

“I love the improbability of Doctor Who. Reason plays no part at all. As in religion, the overriding thing is faith. It may be improbable, but just believe in it and it’ll all come right.”

“When I was approached about the book, I thought, ‘Why not?’ I’m always on the lookout for a novelty. I’m very enthusiastic as I get close to darkness.”

Tom Baker is an actor best known for his role as the Fourth Doctor in the BBC hit series Doctor Who from 1974-1981. After leaving the show, Tom continued to act and provide voiceover work for many popular British TV programmes including Black Adder, Agatha Christie’s Marple, Little Britain, and many more. He is the author of an autobiography, Who On Earth Is Tom Baker? and the darkly comic novel, The Boy Who Kicked Pigs.

What Else Can You Tell Me About The Book?
• Doctor Who Meets Scratchman began out of boredom somewhere in the 1970s, an idea for a story formed by Tom Baker and Ian Marter between set takes and pauses in filming during the Fourth Doctor era.

• Despite great enthusiasm and valiant attempts, funding Scratchman proved difficult (Baker accidentally made a newspaper appeal to the British public for help, and found himself deluged with children’s pocket money - which he had to return.)

• For a long time, Scratchman was forgotten, until a script was found in 2006. It was donated to the British Film Institute by former Doctor Who producer John Nathan-Turner before his death in 2002.

Who's Publishing The Book And What's The Price?
BBC Books | 24th January| Hardback | £16.99
BBC Audiobook read by Tom Baker also available from the 24th January.
(We realise the book isn't out until January and we're recommending it as a Christmas gift idea but pre-ordering is always a good thing.  Anyway, use your TARDIS.)