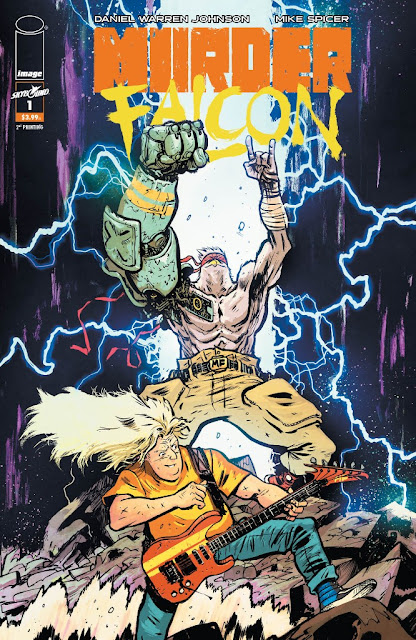 Debut issue rushed back to print

Image Comics and Skybound Entertainment are thrilled to announce that the first issue of Daniel Warren Johnson’s (EXTREMITY) heavy metal action series MURDER FALCON is being fast-tracked for a second printing in order to keep up with overwhelming customer demand.

In MURDER FALCON, the world is under attack by monsters, and mega-talented guitarist Jake’s life is falling apart: no band, no girl, no future…until he meets Murder Falcon. He was sent from The Heavy to destroy all evil, but he can’t do it without Jake shredding up a storm. Now, with every chord Jake plays on his guitar, the power of metal fuels Murder Falcon into all-out kung fu fury on those that seek to conquer Earth. It’s time to shred!

“Guaranteed to make your ears bleed with the awesome notes of its heavy metal roots.” —Syfy Wire

“Everything in this book is cranked to 11 and that’s what makes it so damn good.”
—Nerdist

“A great book for metalheads, monster fans, and every bonkers misfit in between.” —Big Comic Page

“A fun, high-octane romp that also has a lot of heart to it as well.”
—Word of the Nerd