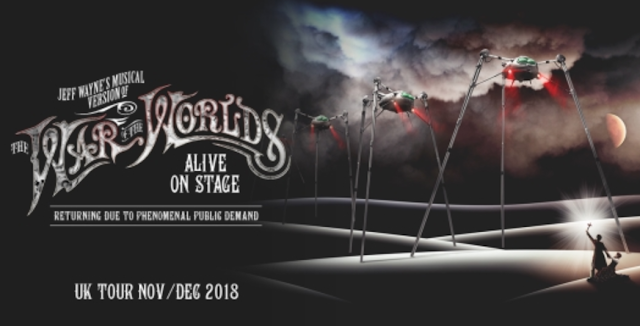 One of the most ground-breaking arena tours of all time, Jeff Wayne’s Musical Version of ‘The War of the Worlds’ - Alive on Stage is to make its return to arenas throughout the UK in 2018. Tickets for the Tour are on sale now from http://www.livenation.co.uk.

Nearly 40 years on, based on HG Wells’ dark Victorian tale, Jeff Wayne's Musical Version of The War of The Worlds remains a firm favourite to millions around the world.

The show will again feature a stellar cast with Jeff Wayne returning to the podium to conduct the 9-piece Black Smoke Band and 36-piece ULLAdubULLA Strings, while Liam Neeson retains his role in 3D holography as The Journalist.

Star of stage and screen Jason Donovan returns to the role of Parson Nathaniel alongside West End actress Carrie Hope Fletcher as Beth, his wife. Actor and theatre star Adam Garcia will debut as The Artilleryman, British singer-songwriter Newton Faulkner will perform The Sung Thoughts of The Journalist, Inglorious front man Nathan James will play The Voice of Humanity, with Anna-MarieWayne reprising her role as Carrie, The Journalist’s Fiancée.

Jason Donovan commented;
“I am delighted to be re-joining the cast for this very special 40th Anniversary Tour. ‘The War of The Worlds’ has such enduring appeal and its fan base seems to grow and grow. With each tour, the scale, the drama and the special effects get more and more exciting, so I can't wait to see what Jeff has planned for this spectacular celebration!

Carrie Hope Fletcher added;
"I’m absolutely delighted and honoured to be reprising my role as ‘Beth, Parson’s Nathaniel’s Wife', alongside Jason Donovan, especially for this momentous 40th Anniversary year! Having grown up listening to the album, ‘The War of The Worlds’ holds a personal significance, and with the new ingredients, I can’t wait to see how this new production has evolved!"

Newton Faulkner said;
"I grew up listening to 'The War of The Worlds' and I’m playing The Sung Thoughts of The Journalist, alongside Liam Neeson and, as if that wasn’t enough, Jeff Wayne asked me really nicely. Also, it’s got giant Martian Fighting Machines in it! An actual MFM that shoots real flames out of its giant face! I’m very excited.

Adam Garcia commented;
“I have been waiting to be a part of TWOTW live since it first began in this arena format. Finally I get to be on stage - inside the 'The War of The Worlds'. I’m terribly excited.”

Nathan James said;
"I am beyond excited to be part of the 40th anniversary production of The War of The worlds. I can't wait to stand on stage in these incredible venues and perform this wonderful music alongside such a hugely talented cast. I'm so thankful that Jeff has picked me to sing ‘Thunder Child’ - a song I have loved since I was a kid. I remember hearing those opening chords for the first time and to get to hear them from backstage is going to be a really surreal moment every night. This is a proper dream job."

Anna-Marie Wayne said:
"The War of The Worlds is obviously very near and dear to my heart and I am so excited to be reprising the role of Carrie again for the 40th anniversary Tour! I can't wait for everyone to see how the character has developed since the last tour - lots of new and exciting things!"

In 2018 TWOTW will “break through the fourth wall”. 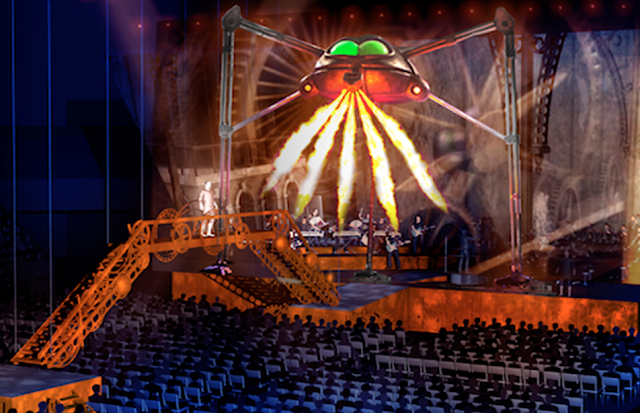 Built around a huge arched bridge running through the centre of the arena brings the action closer to the audience for a most captivating and immersive experience.

This production, mixed live in Surround Sound, will once again feature:
The iconic 3-tonne, 35-foot tall Martian Fighting Machine firing real flame Heat Rays at the audience.
A 100-foot wide 'Animation Wall' with 2 hours of cutting edge CGI.
A ground-breaking levitation effect.
The incineration of a cast member in full view of the audience.
Leaf drops over the audience.
…and much, much more!

Jeff Wayne said: “In June 1978 when my original double album was released. I had no idea if it would vanish as quickly as one can say… “ULLAdubULLA!”

But here we are today, celebrating its 40th Anniversary and seeing the newly re-mastered original double album sitting on top of the UK vinyl album charts. 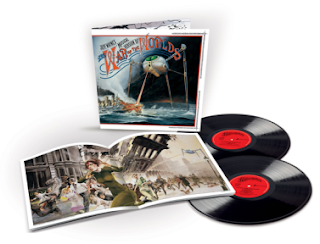 To start the year off, Sony Music reissued the original 1978 double 12” vinyl album which is currently number 1 in the vinyl chart.

This vinyl reissue is the first in a number of special releases planned throughout 2018 to mark the 40th Anniversary of Jeff Wayne’s iconic masterpiece. The reissue is available to order on Amazon now.


The year will continue with a number of additional special releases to mark the 40th Anniversary of this iconic masterpiece.

Jeff Wayne's double album was originally released by CBS Records in 1978. It has enjoyed huge success and critical acclaim across the globe with over 15 million records sold and spending over 330 weeks in the UK Album Charts (to date) plus achieving two International hit singles - 'Forever Autumn' and 'The Eve of The War'. It has been Top 10 in 22 countries and Number 1 in 11 of them.

The War of The Worlds has also won two prestigious UK Ivor Novello Awards, the US Best Recording in Science Fiction and Fantasy (the judges included Alfred Hitchcock, George Lucas and Steven Spielberg), as well as winning for Jeff, Classic Rock's 'Showman of The Year' Award.

Jeff Wayne's Musical Version of The War of The Worlds has grown into a true classic, acquiring new generations of devoted followers since its original release.