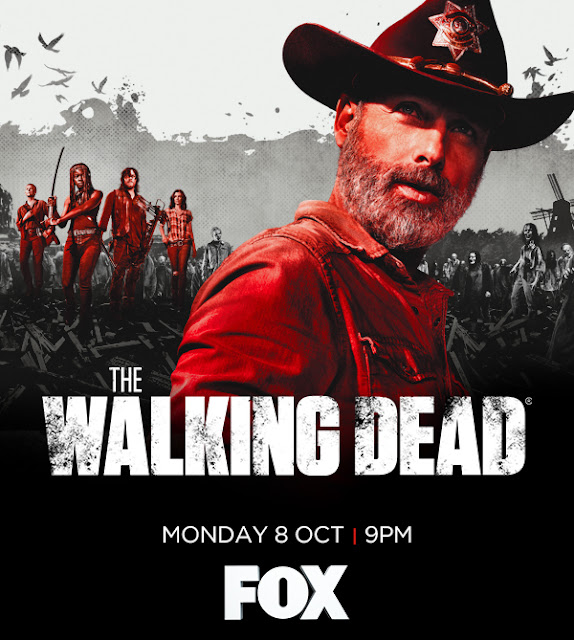 Mark your calendars! The Walking Dead returns to FOX on Monday 8 October 9PM. From what we’ve seen so far of this season, war was the easy part, but peace will be harder….

After being put through an “All Out War”, which claimed some of our most beloved characters, we thought the show would give us some time this summer to process the climactic season 8 finale. How wrong we were. Instead, we had confirmation that this is series stalwart Rick Grimes’ last season on the show, as announced by Andrew Lincoln at this summer’s San Diego Comic-Con.

At the end of last season, Rick held Negan’s life in his hands, and a knife to his throat. Against the odds, he decided to spare Negan’s life, upholding the values of his late son, Carl, in order to build for a better future. We instantly saw the division that Rick’s character-defining decision caused amongst the group.

As we start this season, the survivors are living in relative peace compared to before, and are working together to build the new world that Carl envisioned under Rick’s steady leadership. The cracks are beginning to show already, so how long can this utopia last? Get ready for some answers this October.

Season 9 is the beginning of an all-new chapter, and a quantum leap forward for the series. As time passes by, the communities confront unexpected obstacles, danger, and of course, walkers. The remnants of the last world are slowly dying, and a new evolution has begun. One thing’s for sure, this season will be nothing like The Walking Dead we’ve seen before.

Angela Kang, the long-term lead writer of the series, will now be taking over the reigns as showrunner for season 9. Meanwhile, British BAFTA and Golden Globe winner Samantha Morton (Fantastic Beasts and Where To Find Them) joins the show and will be starring as Alpha, the leader of the hugely anticipated ‘The Whisperers’ - a mysterious group of survivors from the comic books who disguise themselves as walkers to blend in with the undead.