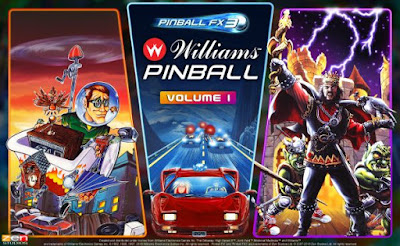 Zen Studios is excited to reveal that it will release Pinball FX3 – Williams™ Pinball Volume 1 on October 9, 2018. The initial pack includes Medieval Madness®, Junk Yard and The Getaway®: High Speed II®, and will cost $9.99 / €9.99 / £8.99. Fish Tales will be free for all Pinball FX3 players on Nintendo Switch, PlayStation 4, Xbox One, Windows 10 and Steam, as well as for Zen Pinball 2 on Mac.

At the push of a button players can toggle between classic and remastered versions of the tables.


The remastered versions of the Williams™ Pinball tables have been added to the Pinball FX3 LIVE Beta on Steam. The beta will conclude on September 24, 2018.

An updated FAQ with additional information is available on the PinballFX website.