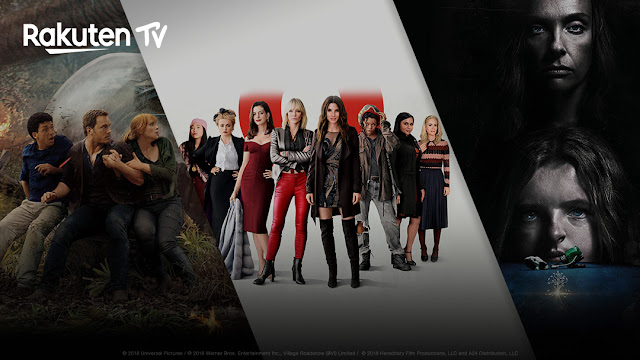 Get ready for a frightening, action-packed October on Rakuten TV with plenty of exciting new releases to make you laugh, jump, gasp and keep you on the edge of your seat.

After terrifying audiences around the world, next month you’ll be able to experience Hereditary from the comfort of, or hiding behind, your sofa. Featuring a critically acclaimed performance from Oscar-nominated Toni Collette, the film swiftly made a name for itself and scared even the toughest of critics. Will you be brave enough to take on this family drama full of disturbing events and dark secrets?

If you need something to lighten the mood, you can join the ladies of Ocean’s 8 to see if their characters are as talented at pulling off a heist as these women are at acting. Starring: Sandra Bullock, Cate Blanchett, Anne Hathaway, Sarah Paulson, Mindy Kaling, Helena Bonham Carter, Rihanna and Awkwafina, catch these glamourous ladies on your smart TV in 4K HDR.

To get the heart racing after that comedy caper, you can jump into some prehistoric action with Chris Pratt and Bryce Dallas Howard in Jurassic World: Fallen Kingdom. Catch the film in mind-blowing 4K HDR to experience the sharpest teeth and claws as they reach through the screen.

For a darker turn to your evening, revisit Benicio Del Toro and Josh Brolin in Sicario 2: Soldado as they delve into the world of drug wars or see how a horrifying, violent tradition began with The First Purge, just in time for Halloween.

Rakuten TV – “Your cinema at home” - is one of the leading Video-On-Demand platforms in Europe providing the latest movie releases with the latest technology in a true cinematic experience available on Smart TVs. Rakuten TV is currently distributed in 12 countries and it is part of the Internet and e-commerce Japanese giant Rakuten, now sponsor of FC Barcelona, The Golden State Warriors and Shakira’s El Dorado Tour.