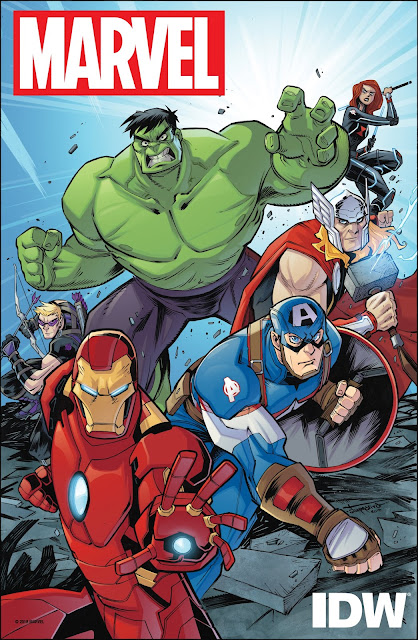 IDW Publishing announces today its exciting line-up of creators for the all-new Marvel Action: Avengers comic book series for younger readers, based on Marvel’s most popular Super Hero team. Marvel Action: Avengers will be helmed by writer Matthew K. Manning and artist Jon Sommariva, introducing a dynamic roster to battle a mega-sized threat, weirder and wilder than any faced before!

“I’m really excited about working on Marvel Action: Avengers – we’re planning big, blockbuster plots, surprising twists, and both returning villains and new threats,” says Manning. “We’ll be digging into the personalities of these heroes to show all the fans – kids and adults both – exactly what makes them so great.”

“I am absolutely thrilled and inspired to be drawing some of the most iconic characters in the history of comics,” says Sommariva. “I grew up with these characters, so it's a real joy to bring my high energy to the visual style of Marvel Action: Avengers. I can't wait to make fun, action-packed comics for fans of all ages!"

In addition to writing Rise of the Teenage Mutant Ninja Turtles and the Batman / TMNT Adventures crossover for IDW, Matthew K. Manning has proven his knowledge of the Marvel Universe as author of the DK Publishing books Iron Man: The Ultimate Guide to the Armored Super Hero and The Avengers Encyclopedia.

"We're incredibly excited to work with Marvel to bring in a new era of all-ages Avengers comics,” says Bobby Curnow, Group Editor at IDW Publishing. “Having worked with the creative team in the past, and seeing the material they are cooking up, I'm eager for this book to get in the hands of readers. The enthusiasm and love of comics in this book is absolutely infectious and will be sure to create a new generation of Avengers fans.”

For information on how to secure copies of IDW’s Marvel Action: Spider-Man (debuting in November), Marvel Action: Avengers (December), and Marvel Action: Black Panther (January) comics specially aimed at the 8-12 age range, please contact your local comic shop or visit www.comicshoplocator.com to find a store near you.